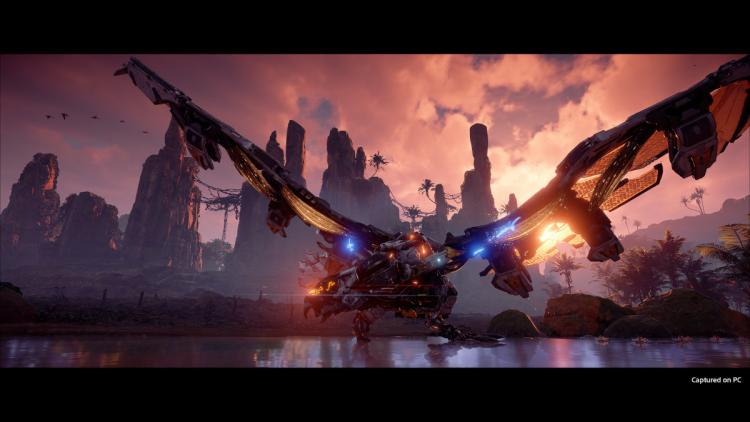 Earlier this month Guerrilla surprised a large portion of their player community by announcing that Horizon Zero Dawn Complete Edition - a game released in August 2020 - would support NVIDIA DLSS upscaling in an upcoming patch. That patch, v1.11, has arrived but players were still awaiting driver support from NVIDIA as of last weekend. Thankfully the green team haven't left players hanging long; their GeForce Game Ready Driver v497.29 is prepped and ready to download today.

This new Game Ready Driver from NVIDIA is a relatively minor revision all things considered - not many big game releases are expected in the very near future - but it does serve two key roles. As mentioned, the first is unlocking support for Deep Learning Super Sampling upscaling techniques in Horizon Zero Dawn for PC. The second is to provide optimisations for GTFO, a co-op horror game developed by 10 Chambers that launched on December 10th.

Horizon Zero Dawn is an extremely attractive title that, by virtue of its high image quality, can be quite 'expensive' to run. DLSS upscaling however requires frames rendered at lower resolution (and additional data) which are then processed through a pre-trained neural network on GeForce RTX-class GPUs, upscaling to the desired resolution. HZD utilises DLSS v2.3.5, which is typically considerably more robust than early versions of this technology (but requires deeper integration into the game engine).

The upshot is that the developers believe in-game frame rates can be improved by as much as 50% depending on hardware configuration. That's going to be a mouthwatering proposition for anyone running the game on hardware that doesn't trivialise the rendering process (for example an RTX 3090 running at 1080p).

The driver also addresses a handful of known issues while also outlining new or ongoing issues present in Windows 10/11.

Note that this and every GeForce driver released since October 2021 does not support Kepler architecture GPUs, i.e. the 600-series and majority of 700-series graphics hardware. GPUs since the 900-series (Maxwell architecture) are all compatible however.

You can download the GeForce Game Ready v497.29 through the GeForce Experience desktop app or through GeForce.com/drivers after selecting your hardware and OS. All driver-level features are compatible with Windows 10 and 11, as well as the new (but still very rare) RTX 2060 12GB GPU.

This new Game Ready Driver provides the best day-1 gaming experience for the latest new tittles including GTFO as well as the latest update for Horizon Zero Dawn which utilizes NVIDIA DLSS to improve performance by up to 50%.

Changes and Fixed Issues in Version 497.29

As with every released driver, version 497.29 WHQL of the Release 495 driver has open issues and enhancement requests associated with it. This section includes lists of issues that are either not fixed or not implemented in this version. Some problems listed may not have been thoroughly investigated and, in fact, may not be NVIDIA issues. Others may have workaround solutions.

[Deathloop][HDR]: TDR/corruption occurs in the game with Windows HDR enabled.[200767905]
- If this issue occurs, toggle the Windows HDR setting.

[HDR][G-Sync]: Mouse pointer gets stuck after turning on HDR from the Windows Control Panel or after toggling G-Sync from the NVIDIA control panel. [200762998]
To work around, click the mouse (right or left button). The mouse cursor will be sluggish for a few seconds before returning to normal operation.

[NVIDIA Advanced Optimus][NVIDIA Control Panel]: After setting the display multiplexer type to dGPU, the setting is not preserved across a reboot or resume from S4. [200779758]

[NVIDIA Image Scaling][DirectX 11 video apps]: With Image Scaling enabled, video playback is corrupted or results in a system hang after performing an HDR transition. [3431284]
- If HDR is required to be toggled from the Microsoft Control Panel, be sure to switch to a different Image Scaling resolution.