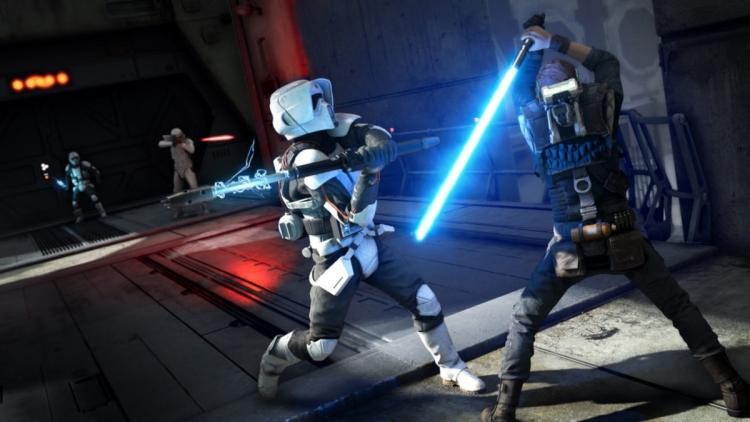 EA's Star Wars Jedi: Fallen Order may turn out to be the biggest game of the year when it launches later this week, and as is tradition NVIDIA are ready from the outset with Game Ready drivers optimised for day one play on PC. The GeForce Game Ready 441.20 driver is aimed at providing the best possible experience for those delving into the game at release, incorporating both performance and especially stability improvements so needed in today's highly complex franchise instalments.

PC videogame launches have had a torrid time of it recently. Red Dead Redemption 2 remains a disappointment on systems of diverse configurations, despite both day 1 drivers and subsequent patches eliminating bugs. Other games in the not too distant past have taken weeks or even months to enter an acceptable state, despite being well served by platform-specific hardware driver updates. The industry as a whole will be collectively holding its breath, not just because it's a major release, but also because its a major Star Wars release.

NVIDIA's GeForce Game Ready 441.20 driver doesn't just cater to Star Wars Jedi: Fallen Order however. It also prepares VR HMD owners for Stormland, the newest title from the minds behind PS4 exclusive Marvel's Spider-Man which is being hailed as a significant step forward in VR gaming. As a VR and Oculus platform-exclusive title, Stormland already has an up-hill battle in reaching a mainstream audience, and the requirements of VR gaming dictate a flawless experience (and hence exceptional driver) lest the horrors of latency-induced nausea are brought to bear.

The latest drivers also add support for a trio of new monitors validated as G-SYNC Compatible - the Acer XB273U, Acer XV273U, and ASUS VG259Q - increasing the total number of supported models for NVIDIA's Adaptive Sync/FreeSync implementation to sixty. A full list can be found here.

And of course no driver release is complete without additions to the 'fixed issues' and 'new issues' list. Unsurprisingly Read Dead Redemption 2 is the biggest name on both lists, but squashing bugs in CS:GO and Quake 3 Arena should be well worth the price of admission to those affected.

You can download the standard and DCH drivers through geforce.com/drivers or via the GeForce Experience App. They are compatible with 64-bit versions of Windows 7 and 10, and GPU support goes as far back as the Kepler (GTX 600-series).

Star Wars Jedi: Fallen Order launches on November 15 and can be purchased through both EA's Origin storefront and Steam.

The list of G-SYNC Compatible displays increases to nearly 60 options with the addition of the Acer XB273U, Acer XV273U, and ASUS VG259Q monitors.

Changes and Fixed Issues in Version 441.20

The following sections list the important changes and the most common issues resolved in this version. This list is only a subset of the total number of changes made in this driver version. The
NVIDIA bug number is provided for reference.

As with every released driver, version 441.20 WHQL of the Release 440 driver has open issues and enhancement requests associated with it. This section includes lists of issues that are either not
fixed or not implemented in this version. Some problems listed may not have been thoroughly investigated and, in fact, may not be NVIDIA issues. Others may have workaround solutions.