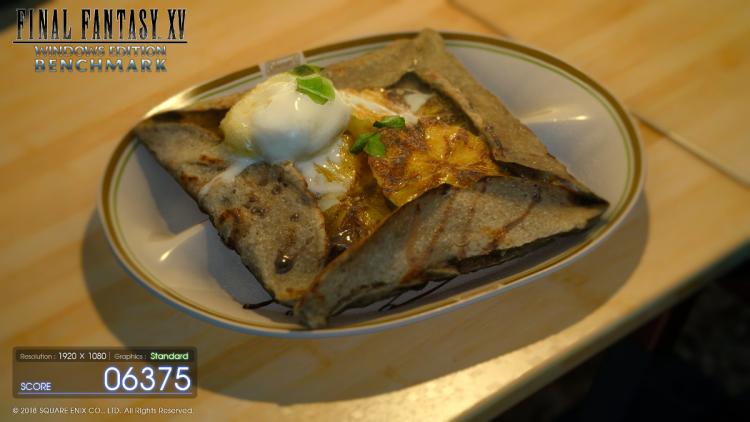 Just imagine how tasty this would look with ray-tracing.

There has been a curious twist to NVIDIA's late-2018 rollout of the GeForce RTX 20-series graphics cards. Appearing on the Final Fantasy XV Windows Edition benchmark aggregate list is a new entry for the 'GeForce RTX 2060', a card as-yet unannounced by the Green Team. Evidence such as this should be taken with a hefty pinch of salt of course, but speculation is entertaining nonetheless.

Only one entry for this RTX 2060 actually exists, and that's within the '3840 x 2160, High Quality' dataset. It scores a solid if unexceptional 2589 pts, placing it in performance terms between the Geforce GTX 1060 6gb (1984 pts) and GTX 1070 (2748 pts). Bear in mind however that this benchmark aggregates the results across thousands of entries where available, so with limited samples the RTX 2060's would be greatly affected by outlier results dragging it down (or up).

An improvement of 25% over the previous generation is fine, and potentially supplanting the GTX 1070 or 1070Ti at more reasonably resolutions (1440p in particular) would be good if the price is right. But scores can and will changes, and after all this is only one score at one (extreme) resolution in one benchmark utility.

A more interesting aspect of this result is that the card is part of the 'RTX' family. Presupposing that NVIDIA don't play fast and loose with their naming scheme it will mean that the RTX 2060 will support GeForce RTX technologies such as real-time ray tracing, DLSS, variable rate shading and multi-view rendering.

Real-time raytracing isn't looking particularly viable right now on the lower end Turing GPU specification cards, but optimisations are in the pipeline. Furthermore the other technologies are all about improving performance, and so would be a massive boon at the midrange and entry level.

So, RTX may be inching its way towards the mainstream, and we may have a new GPU to look forward to in early 2019. CES in January would be a good time for announcement.