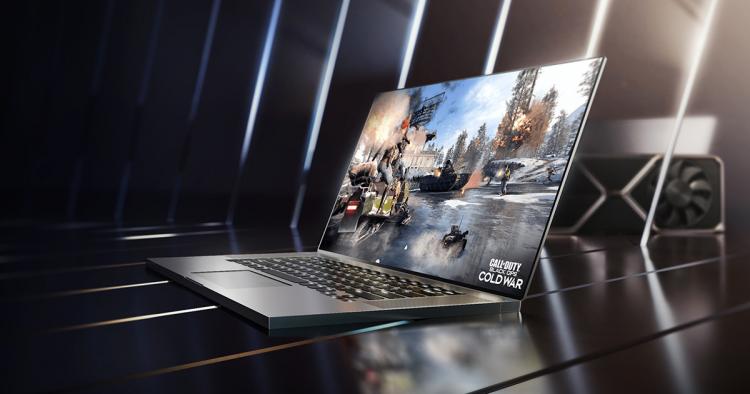 Intel's unveiling of 11th Generation Core 'Tiger Lake' mobile processors has been joined by a veritable chorus of complementary product announcements, with their OEM partners taking centre stage through performance-oriented laptop models that will suit both gamers and content creators. Not to be out-done, NVIDIA have also chimed up with their own hardware reveal, a GPU that should help to improve gaming capabilities at lower price brackets and in many respects fit Intel's new Tiger Lake platform like a glove. We're of course referring to the new GeForce RTX 3050-series.

Comprised of the GeForce RTX 3050 Ti and RTX 3050, this new series intends to bring mobile RTX gaming to prices from $799. With them will come support for real-time hybrid ray tracing, DLSS and other features that leverage NVIDIA's RT and Tensor Core technologies housed within each Ampere-based GPU. It's claimed that the new laptops will be over twice as fast as the previous generation, unlocking silky-smooth 1080p60fps gameplay in titles such as Minecraft RTX and Call of Duty: Black Ops Cold War despite the taxing eye-candy.

NVIDIA's RTX 30-series for laptops are already present in a host of models from popular OEMs including ASUS, Alienware, MSI and GIGABYTE, and are a logical companion to the new flagship Core i9-11980HK and other Tiger Lake chips. Both the RTX 3060 and new RTX 3050-series are great matches for the new mainstream Tiger Lake processors - the Core i5-11400 and i5-11200 - and help Intel achieve their goal of new 'essential'-level gaming notebooks capable of 1080p60 gaming. NVIDIA Reflex support will serve to minimise click-to-screen latency under competitive gaming scenarios. And DLSS also allows users to push higher frame rates at greater display resolutions, making full use of the latest range of 360Hz, 240Hz and 4K 120Hz panels present on some boutique mobile hardware.

NVIDIA Studio laptops also form part of today's launch announcement. These models are rigorously tested for workhorse content creation and are supplied with a GeForce driver branch that undergoes an equal level of validation for each release.

New laptops equipped with the GeForce RTX 3060, 3070 and 3080 are being released immediately, pushing the number of RTX 30-series powered models well over 100. Unfortunately we'll have to wait until the summer for the RTX 3050 Ti and 3050; no doubt they'll be snapped up as and when they do arrive if they can deliver on excellent gaming at an attractive MSRP.

There are currently 323 user(s) online:
Google