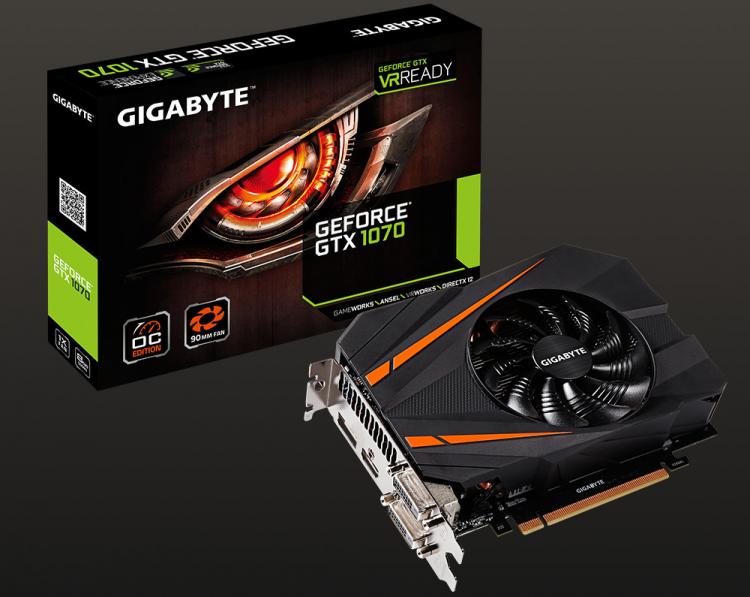 Yesterday, 6 July, Gigabyte officially announced two new editions of the GTX 1070 for its lineup, one of which is the amazingly small GTX 1070 Mini ITX OC Edition. This phenomenally compact graphics card measures only 17cm in length making it ideal for VR and 4K ready HTPCs and portability.

The card comes with the full 8GB GDDR5 of the GTX 1070 and sports two DVI ports, one HDMI and one Display Port, plenty for multi-monitor and VR configurations. This new small form factor offering is built for overclocking. Gigabyte supplied it with 5+1 power phases, compared with the reference 4+1 design. Unlike most small form factor cards, GTX GTX 1070 Mini ITX OC Edition actually ships with higher base and boost clocks than the founders edition. The GTX 1070 Mini ITX OC Edition clocks in with a 1531MHz base clock and a 1721MHz boost while gaming. Gigabyte also built in a new overclocking utility that it calls the XTREME Engine with easy one click overclocking functionality that boosts the clocks to 1556 base and 1746 boost.

Gigabyte engineered a custom cooling solution to keep one of Pascals heavyweights cool even in such a compact form factor. The GTX 1070 Mini ITX OC Edition cooler features a three copper heat pipe design. It also features a 90mm fan that Gigabyte claims to be semi-passive to keep noise to a minimum.

Though a release date hasnt been set for the card as of yet, it seems like there may a new champion in the small form factor space. If Gigabytes claims are accurate, it looks as if it will pull far enough ahead of the Fury X to justify an upgrade in nearly any case.