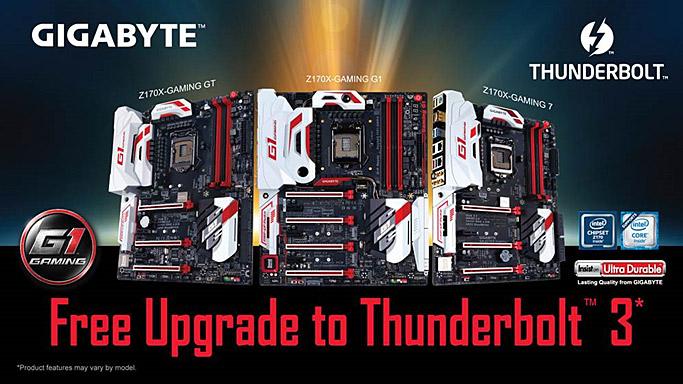 GIGABYTE will be among the first motherboard vendors to offer support for Intel's Thunderbolt 3.0 high-speed connector standard, and they're doing it through a simple firmware upgrade rather than additional purchase.

The Z170X-Gaming G1, Z170X-Gaming GT and Z170X-Gaming 7 motherboards are all part of GIGABYTE's high-end gaming component selection, launched since Intel's July reveal of their new Skylake CPUs. At the time it was known that the Z170 chipset was, in theory at least, optionally compatible with the Thunderbolt 3.0 standard via a Thunderbolt 3 controller; however certification processes weren't sufficiently far enough advanced to allow the protocols' use.

It appears that GIGABYTE played a long game with these premium boards, fitting the Thunderbolt controller but only supporting Thunderbolt 2.0 whilst the certification process sorted itself out. Finally, it appears that all the bumps in the road have been cleared.

Today, via a firmware update available from GIGABYTE.com, each of the above motherboards now support Thunderbolt 3.0 via the USB 3.1 Type-C connector. Thunderbolt 3.0 has double the theoretical bandwidth of 2.0 (40 Gb/s rather than 20) and can also support Displayport 1.2 and deliver up to 36W of power via the port.

There are few Thunderbolt 3 devices currently on the market but, with the adoption of the more ubiquitous Type-C connector standard and compatibility with existing USB Type-C peripherals, it's hoped that there will be far fewer impediments to their implementation than before.

You can find the firmware downloads at the following links: