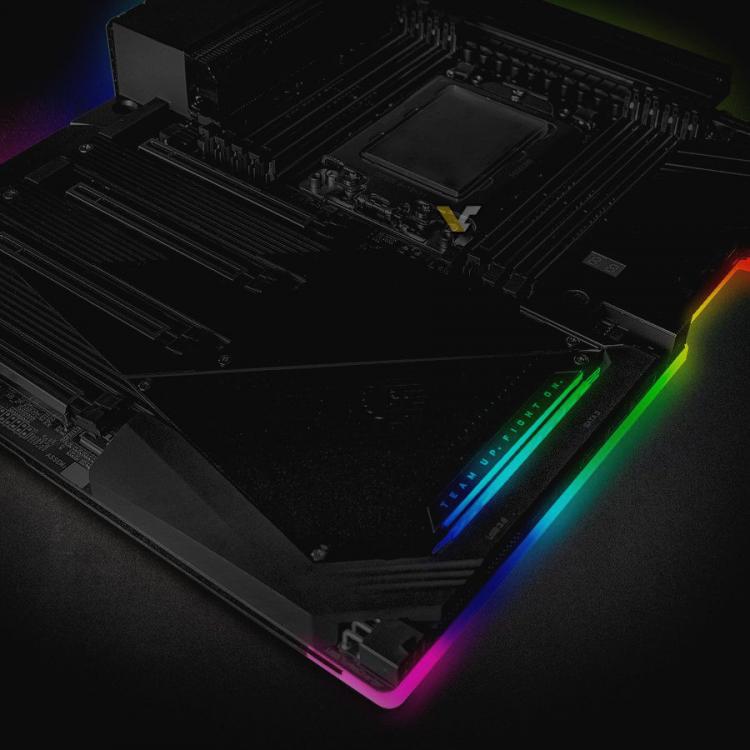 It is anticipated that AMD will be launching their next-generation Threadripper High-End Desktop platform (based on the latest Zen 2 architecture) in November, and true to form GIGABYTE are preparing their marketing well in advanced with a teaser image. This image arrives alongside a separate leak late last week of launch and review embargo dates for the Threadripper platform, which should be in the hands of consumers by November 19th.

Some aspects of the original designs have been brought forward to the new motherboards but there should be plenty of changes under the hood with this generation. It's rumoured that they will be based around a new family of chipsets - TRX40, TRX80 and WRX80 - and feature a new TR4+ socket, each of which will unlock new capabilities for AMD's HEDT platform. Chief among those is the potential for even more CPU cores, PCIe 4.0 and eight-channel memory support, but that is yet to be confirmed.

It's not clear which chipset GIGABYTE's teased motherboard is based on. The RGB lighting likely indicates a place in GIGTABYTE's AORUS gaming range, which probably rules out the workstation-oriented WRX80, but either the TRX40 or TRX80 are candidates. The extremely beefy VRM array would make us lean towards the latter were it not for leaked documentation making no mention of that chipset for the November launch. Either way, the motherboard would need to handle at least the 24-core 3960X Threadripper variant, and potentially even a 64-core 3990X at some point in the future.

Eight DIMM slots could mean support for either quad (2 DIMMs per channel) or eight-channel (1 DIMM per channel) memory, and the four PCIe x16 slots should support 4-way GPU configurations. The motherboard also incorporates a discrete 6-pin PCIe connector at the bottom to provide additional power to these slots.

The board is dominated by an oversized chipset cooler, likely with active cooling. The rest of the board is kept looking sharp through the use of an 'armour' fascia that covers the majority of surface-mounted components. GIGABYTE's inclusion of a BIOS error code display is, as always, a welcome addition. RGB LED edge lighting by contrast will be the board's most 'Marmite' feature.

If rumours prove to be accurate then AMD will be launching the updated Threadripper lineup on November 5th. Expect plenty of teases from their motherboard partners over the next two weeks.