Now, two days into the Consumer Electronics Show (CES) 2011, and we have seen Gigabyte show, amongst other things, a new line of gaming motherboards. The range is entitled 'G1-Killer' as hinted back in November. 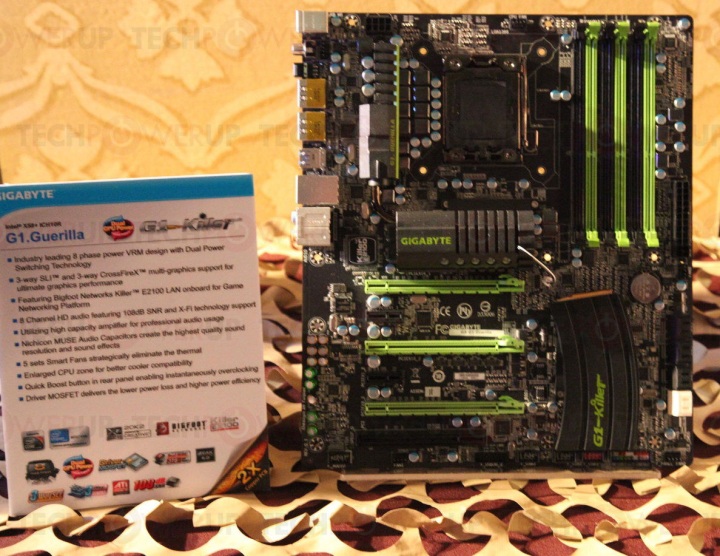 The first of the boards is the G1.Guerilla, which is based on the Intel X58 + ICH10R chipset. Should you choose this board, you get an 8+2 CPU phase VRM, 6 DDR3 slots, 3x PCI-E 2.0 x16 slots (SLI and Crossfire), 2x USB 3.0 and 2x SATA 6Gbps. What makes this board more interesting is that you also get the Killer 2100 NIC and a HD audio codec which can support some X-Fi functions via software.

Also note that the northbridge heatsink is designed to look like a rifle barrel, and the southbridge a magazine. The most affordable of the three, this should be a popular choice for high end gamers. 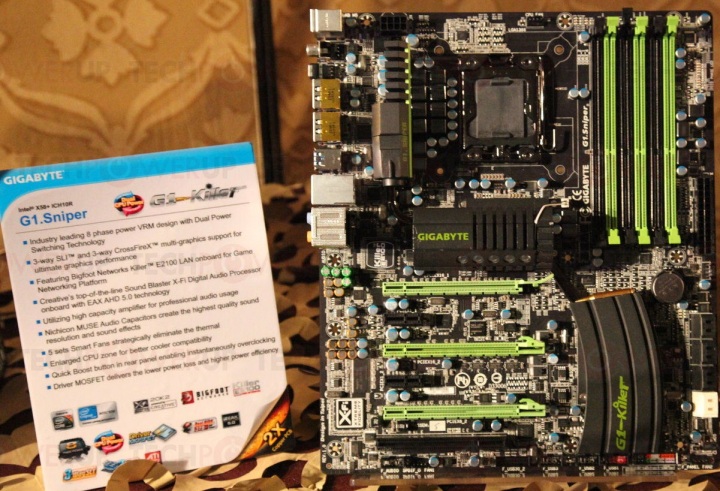 Gigabyte have really put some thought into the motherboard design, an aspect of their previous lineups that was never as ambitious

The second of the boards is the G1.Sniper, which is again based on the Intel X58 + ICH10R chipset. The middle of the road board gets you an 8+2 CPU phase VRM, 6 DDR3 slots, 3x PCI-E 2.0 x16 slots (SLI and Crossfire), 2x USB 3.0 and 2x SATA 6Gbps etc. Like the Guerilla, this board has something special for LAN and audio, with the same Killer 2100 NIC but also sporting the Creative SB X-Fi CA20K2 processor that's found in some of the high end X-Fi standalone products. This excellent addition means this board should certainly be popular with gamers who want to give their i7 CPUs a lifeline before Socket 2011 hits.

As with the Guerilla, the Sniper sports similar heatsink design, which is eye-catching and now finds its way on to the CPU VRM too. 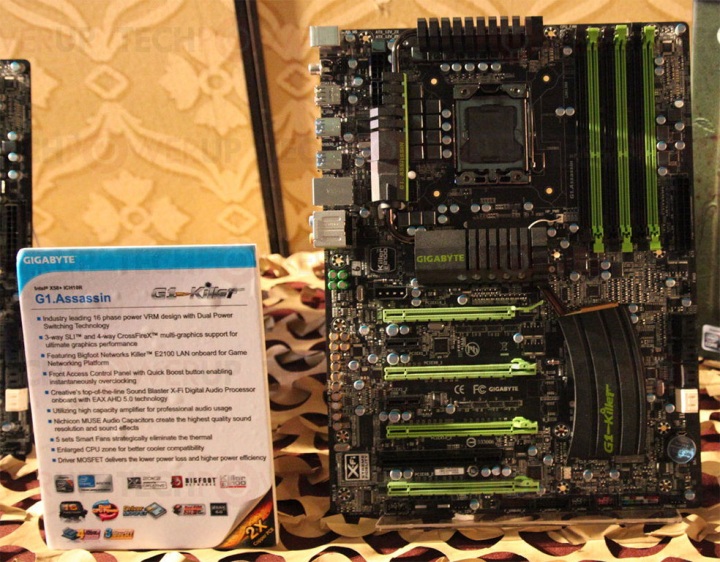 Some will love, others will hate, but either way, this new design will turn heads

The flagship of this particular fleet is the G1.Assassin, which is once more based on the Intel X58 + ICH10R chipset. A 16-phase CPU VRM design, much like the X58A-UD7 gives overclocking stability, with 6 DDR3 slots, 4x PCI-E 2.0 x16 slots (3-way SLI and 4-way CrossfireX), as well as the usual features seen on the other boards. Like the Guerilla and Sniper, this board has something special up it's sleeve, with the same Killer 2100 NIC but also the Creative SB X-Fi CA20K2 processor from the Sniper.

The design of this board will lend itself to overclockers who also game, with performance set to be similar to the UD7 or UD9. One thing's for sure - it won't be cheap, but it'll be a good choice for enthusiasts with many graphics cards who don't want to compromise on audio or network performance too.


These new additions from Gigabyte are a departure from what we're used to seeing from the Taiwan-based giant. Typically, the colour scheme of their boards has been blue PCB + white/orange components, but now it appears they're attempting to appeal to the more superficial high end user by making the boards look as good as they no doubt perform. This may well be a move to counteract the massive success ASUS has had with their much-hyped RoG line of products, now it's time for Gigabyte to take a slice of the highest end of markets.

Personally, I like the design on the whole. Perhaps the heatsinks are a little much, but I'm sure they will no doubt have widespread appeal, particularly with those who had not ventured into Gigabyte's lineup due to aesthetic considerations for their new pride and joy. May battle commence!

What's your take on these boards? Leave a comment in the forums to let us know!