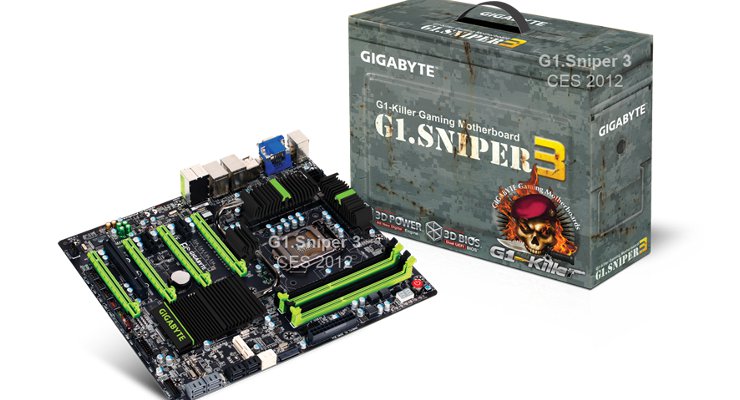 The launch of Intel's Ivy Bridge CPU's and Panther Point motherbaord platform is still months off by all accounts, but you can tell that we're getting closer. GIGABYTE have finally taken the wraps off a few members of their Z77 motherboard family, roughly the equivalent to today's LGA1155 Z68 for Sandy Bridge, and shown them off to eager press at CES. Understandably they were tight-lipped about the capabilities of the platform - Intel still have an official NDA in place for most of the features - but they could reveal a few interesting titbits. 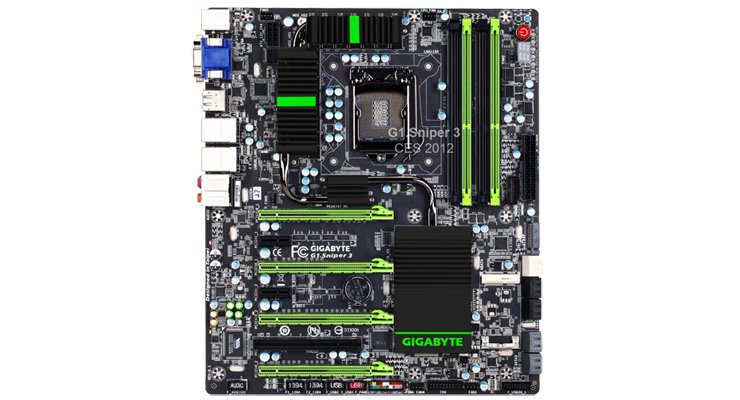 The Sniper 3 will probably amount to GIGABYTE's high-end gamer motherboard. The colouring is immediately recognisable as from the G1 family, and the board layout looks pretty close to being finished though they're at pains to state that the heatsinks of all the boards on display aren't final.

Feature-wise, we can immediately note external display options so this Z77 will be able to utilise Ivy Bridge's integrated graphics. Four x16 slots indicates support for up-to 4-way SLI and Crossfire within what appears to be an eATX form factor, however the images shown indicate that they're each only wired to support 8 lanes. This will tend to be a limitation on non-PCIe 3.0 cards unless addressed, though if you're just running one GFX card the Sniper 3 probably isn't for you.

Also worthy of note is the standard mSATA slot between the chipset heatsinks and SATA ports. mSATA should be a significant feature of the Z7x platform when coupled with Intel's 2nd generation Smart Response Tech for hard drive caching, but it takes up plenty of room on what is increasingly a cramped motherboard layout. Continuing with the gaming features, the Sniper 3 will be the first board to feature the latest Qualcomm Atheros Killer E2201 NIC and offer dual-LAN capabilities when coupled with Intel's integrated solution. Also available will be Creative's new Soundcore 3D audio processor, just in case you don't have access to a high-end soundcard. Otherwise the Sniper 3 is rounded off by plenty of SATA3 6GBPS ports, onboard power-on, debugging LEDs, USB 3 headers and aux. motherboard power via SATA connector. 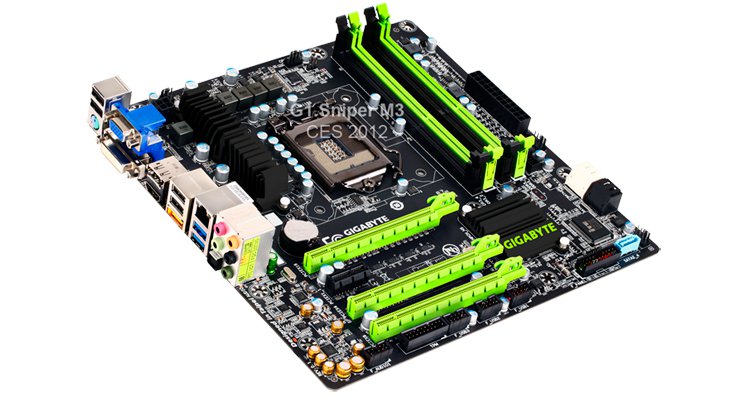 The Sniper M3 is an mATX variant of the Sniper 3. Obviously supporting 2-way SLi/Crossfire, the M3 appears to dispense with some other features on its bigger brother such as on-board power on, LED boot diagnostics, mSATA and more than a few SATA ports. Definitely one for a LAN gamer seeking to cram as many gaming features as possible into a small form-factor whilst not being too concerned with a few quality of life additions. 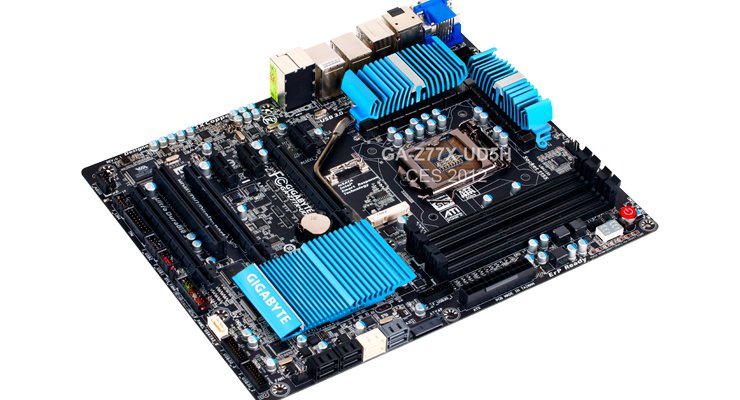 Described as the highest end mainstream Z77 motherboard they'll be launching (so no UD7 or UD9), the UD5 inherits many of the gamer features seen on the high end products: Dual-BIOS, onboard power switches, voltage read points etc. Whilst supporting 3-way SLI/Crossfire the board is obviously tailored to 2-way SLI with support for triple-slot cooling on both cards. Unsurprisingly mSATA makes another appearance. The slightly lower-end UD3H was also on display, but it wasn't immediately obvious how it differed from the UD5 variant. 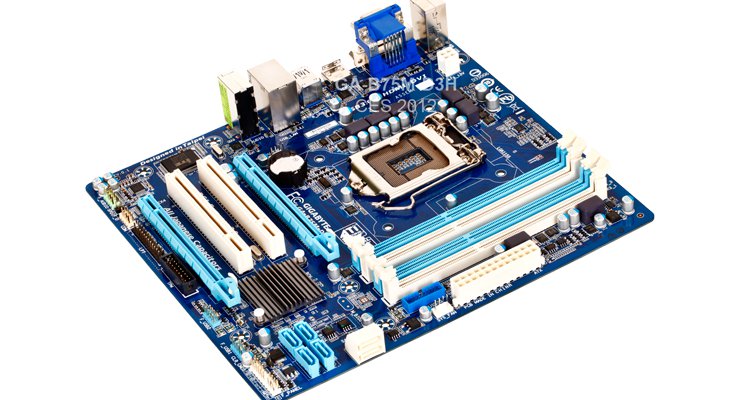 Finally, GIGABYTE also gave a first public appearance to the budget/SOHO B75 platform. In the guise of this mATX variant, the platform is aimed at businesses seeking remote management and support of PCs as a cost-saving exercise. The language used heavily implies that Intel has something special up their sleeve when it comes to B75 for business.

No release date or pricing was so much as hinted at beyond being availble at the launch of Ivy Bridge, but GIGABYTE did leave the door open for further boards in the Ivy Bridge range as yet still under wraps. With hicookie still obviously influential as their in-house overclocking guru it would be unsurprising to see a board specifically tailored to extreme overclocking (so long as the new platform is flexible enough in BCLK overclocking) in a guise similar to the GA-X58-OC.