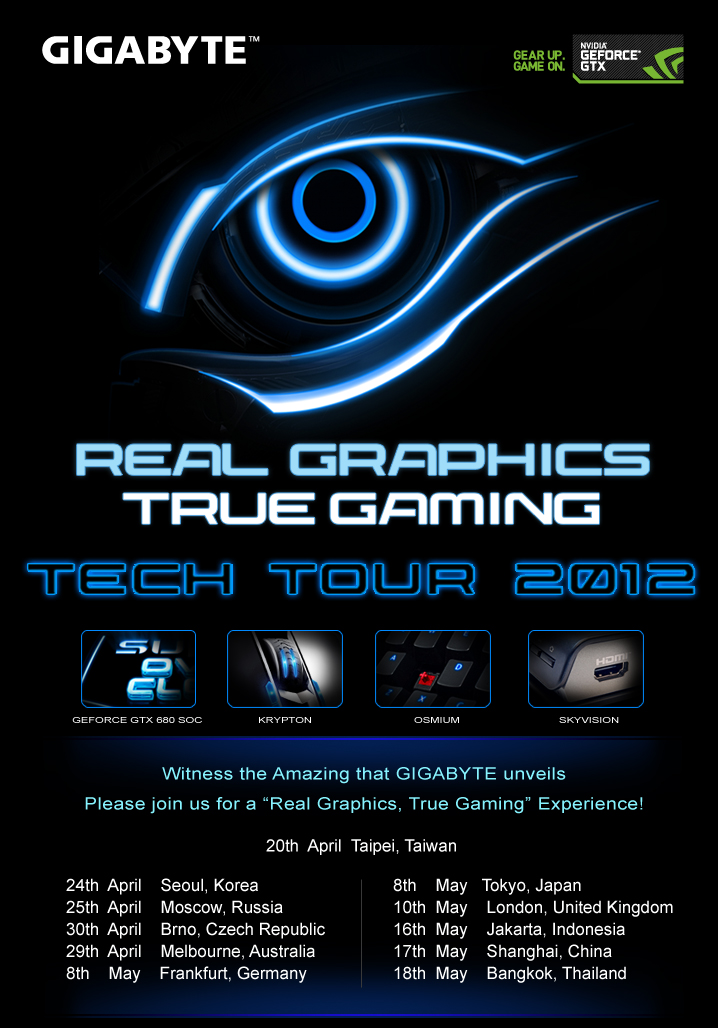 In an effort to reach out to users, business partners, media and worldwide GIGABYTE are following up the success of last year's Tech Tour with the "Real Graphics, True Gaming" Tech Tour 2012. At the events GIGABYTE will take the opportunity to feature new products which have been designed specifically for gamers, including their upcoming flagship GeForce GTX 680 Super Overclocked with Windforce 5X cooler.

Peripherals won't be overlooked as GIGABYTE expand their Aivia range of gaming keyboards and mice. More details of the Krypton mouse and Osmium keyboard (which appears to include mechanical switches) will be unveiled at that time. Finally, GIGABYTE will also be taking the wraps off the WHDI 'SkyVision', which they define as a 'wireless HD sync device'; definitely one to keep your eyes on.

They're almost certainly not the only highlights on the Tech Tour; each event will no doubt be ably supported by other recently released gaming hardware such as their Z77 motherboard range. The full text of the Press Release can be read below, and we'll attempt to keep you updated when we hear more.

Taipei, Taiwan, April 18th, 2012  GIGABYTE, a leading manufacturer of motherboards and graphics cards, is excited to kick off GIGABYTE Real Graphics, True Gaming Tech Tour 2012. GIGABYTE will start the Tech Tour from Taiwan on April 20th with an exciting announcement of several whole new products. As for last year, GIGABYTE presented a perfect gaming environment for hardcore gamers; this year, GIGABYTE is going to upgrade it even more!! With the latest 28nm fabrication process GeForce® GTX 680 GPU, GIGABYTE will unveil their own-designed GTX 680 Super Overclock Edition. Thanks for all the supports from gamers, GIGABYTE will also announce their new Aivia gaming keyboard and mouse, and wireless HD sync device during Tech Tour.

There are currently 921 user(s) online:
Google