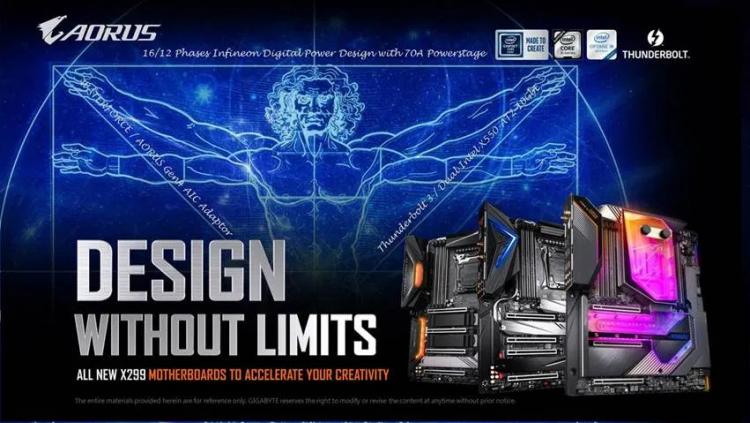 Intel are expected to refresh their range of High End Desktop CPUs, i.e. CPUs with 10 or more cores adapted from workstation-class components, in the coming months, and updated partner motherboards will augment that lineup. At Computex 2019 a number of these motherboard models were showcased in pre-production form - including the 'X299G AORUS MASTER' we spotted in our coverage of the event - and these designs are now in the process of being formally announced, beginning with GIGABYTE.

Today GIGABYTE have taken the wraps off a trio of X299X motherboards primed for Cascade Lake-X AKA Intel's 10th Generation HEDT CPUs, which may or may not be their only new products for the platform. Intel 10th Gen. HEDT chips will top out at 18-cores in the LGA2066 socket with operating frequency of up to 4.8GHz (3.8GHz on an all-core Turbo mode), necessitating a comprehensive power delivery system and high-grade components, but up to date features also justify the updated chipset. Note also the change in naming scheme from X299G to X299X since Computex, likely due to the association 'G' suffixes have with graphics. However, they're still based off the well-established X299 chipset, serving to reduce overall cost.

GIGABYTE's X299X DESIGNARE 10G, X299X AORUS MASTER and X299X AORUS XTREME WATERFORCE cater to subtly different power user segments while exploring similar feature sets. Up to 16 VRM phases mean support for heavily overclocked Intel Core-X 18-core CPUs, while connectivity options including Thunderbolt 3 and up to dual Intel 10GbE networking add to their premium aura. As much as 256GB RAM (8x32GB DIMMS, quad-channel) can be accommodated in each motherboard, and high-end NVIDIA NVLINK Quadro configurations have also been validated on the platform to make them strong candidates for workstation configurations optimised for 3D modelling and rendering.

As the name suggests, the headline feature of GIGABYTE's X299X DESIGNARE 10G is support for Intel Dual 10GbE networking. The design also incorporates strong cooling for on-board components including chipset and M.2 slots with a heatpipe bisecting the board and running up to the main VRM heatsink array. Its four PCEe slots are arranged for three dual-slot graphics cards and an additional single-slot add-in card optimally, or two thicker triple-slot cards. A blue/black livery is just low-key enough to be suitable for office environments, and yet at the same time be a great blank canvas for enthusiast content creators keen to add their own flair. 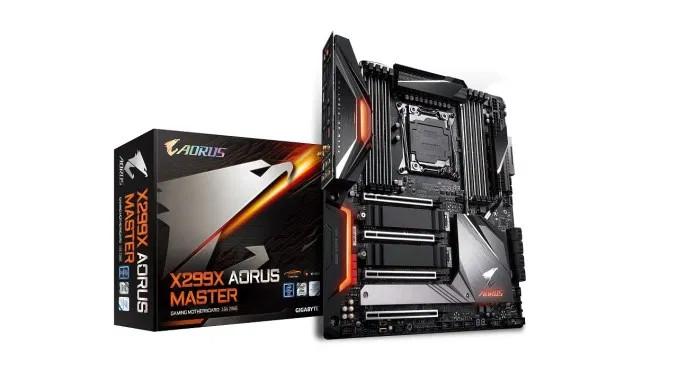 The X299X AORUS MASTER is a premium board that's part of the manufacturer's gaming brand. While not quite the flagship SKU (that honour is reserved for the final member of the range) it still supports up to 4-way GPU configurations with reinforced PCIe x16 slots and a 12-phase VRM similar to the DESIGNARE 10G for more stable CPU power when overclocking.

Lastly, the X299X AORUS XTREME WATERFORCE is GIGABYTE's ultra-premium model intended for owners who value performance with no concern for cost. An integrated CPU waterblock dominates the board and includes integrated configurable RGB lighting for just a touch more customisation than is typical in a motherboard out-the-box. Only three PCIe slots are exposed, laid out for two triple-slot graphics cards. Expect these to be listed for a very pretty penny.

Style follows function in each motherboards as the surface area is covered by GIGABYTE's 'thermal armour,' spreading the heat generated by PCH and M.2 drives and drawing it away via a heatpipe to large heatsinks to the north of the board. Intel 802.11ax Wifi6, Smart Fan 5 Technology, RGB Fusion 2.0 and DTS&#65306;X Ultra Technology on all SKUs round out the major features without delving into the minutiae.

These models will be available soon, likely timed to coincide with the new CPUs. No statement has been made regarding backwards and forwards compatibility with older LGA2066 CPUs.