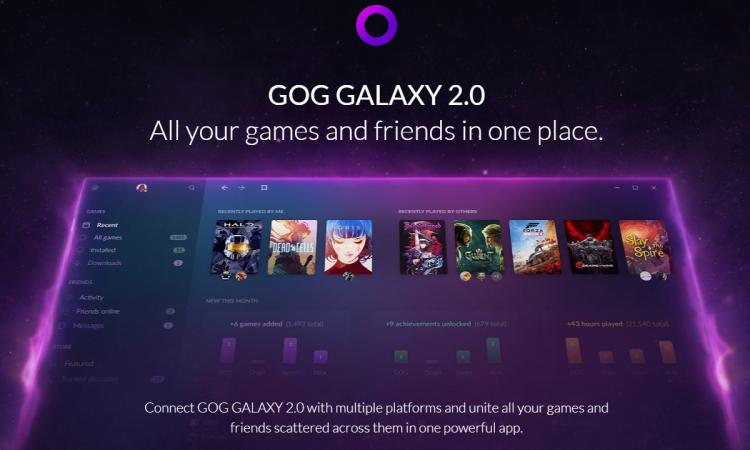 GOG - formerly Good Old Games - has long played the underdog to Steam both in terms of their online store dominance and impact on your gameplay habits. Steam has become a centralised PC app for games distribution, patching, servers and friend 'management' - really the whole shebang; whereas GOG and its Galaxy desktop application have garnered a reputation for revitalising genre classics and bringing them to modern PCs. GOG have plans to change that however, centring on a more all-encompassing Galaxy app.

GOG Galaxy 2.0 aims to be a PC and Mac client which brings together your PC games library under one roof, no matter which distribution platform it was bought on (Steam, GOG, UPlay, Origin etc.). There has long been a need for this sort of platform-agnostic functionality, but recent developments (particularly Epic's foray into games distribution) increases not only demand but also urgency to ensure that PC gaming as a whole doesn't become a fractured mess.

That would immediately tick all the right boxes in terms of game library management, but GOG's ambitions go a little further. They also want to bring in your library of titles from other non-PC platforms such as consoles and perhaps even smartphones. You won't be able to one-click launch as you will a PC game (unless perhaps streaming *from* console becomes a thing), but it would allow you to keep track of in-game milestones and other console game metrics you wouldn't normally have access to on PC.

From there, Galaxy 2.0 branches out into 'social media-lite' features. You'll be able to use it to keep track of your friends as they play across all distribution platforms (Steam, Epic, UPlay etc.) and even to console, and although it's not explicitly stated it would only be a small step to integrating other social structures such as clans.

Other quality of life features are also on the spec. list, including cloud saves (and reverts to previous saves), in-game overlays, managing game updates and more. All-in-all, you're looking at a pretty comprehensive approach.

This project isn't without its challenges however. While fragmented, there are plenty of apps that when aggregated offer the same level or higher functionality on PC specifically. It's possible for instance to configure Steam to launch the majority of non-Steam games, and Discord provides notification of friend activity and online status as well as acting as a comprehensive text and voice chat app. The cross console functionality does appear to be unique however, marking Galaxy 2.0 out from the crowd.

GOG are banking on the convenience of a central hub for all this functionality being enough of a draw to bring in typically lazy gamers content lacking the motivation to embrace change. But if they can pull it off the rewards are great, not least because it would naturally funnel customers towards the GOG Store. Gaining a presence in the console space just as we approach a new generation also has to be factoring into their calculations.

GOG Galaxy 2.0 is due to enter closed beta soon, with signups available at www.gogalaxy.com. The final desktop client will be available for free on Windows and Mac.

Main features and what to expect once GOG GALAXY 2.0 officially launches.

Import all your games from PC and consoles, build and organize them into one master collection. Install and launch any PC game you own, no matter the platform.
Keep track of all your achievements, hours played and games owned.
Customize your library by filtering, sorting, tagging, and adding your own visuals like game backgrounds or covers.
Follow upcoming releases and discover games popular among your friends and the gaming community.

Bring together your friends from all platforms and see their online status.
No matter on which platform your friends are, you can chat with them.
See your friends cross-platform achievements, game time milestones and recently played games.
See whos the master collector, completionist or spends the most time playing.

Your personal data will never be shared with third parties.
Were not spying on data from your computer.
With a single click, you can remove imported games and friends data from our servers.

All new library management and friends features take your experience to the next level.
The best way to run and update your GOG games.
Use features like cloud saving, in-game overlay, multiplayer & matchmaking, rollbacks and more.
The client is not required to play your DRM-free GOG games.

Connect more platforms and add new features with open-source integrations.
All customizations and changes to your library are saved in the cloud and synced between all your devices.
Save any view like a customized library or favorite games and friends to access them instantly.

There are currently 513 user(s) online:
Google