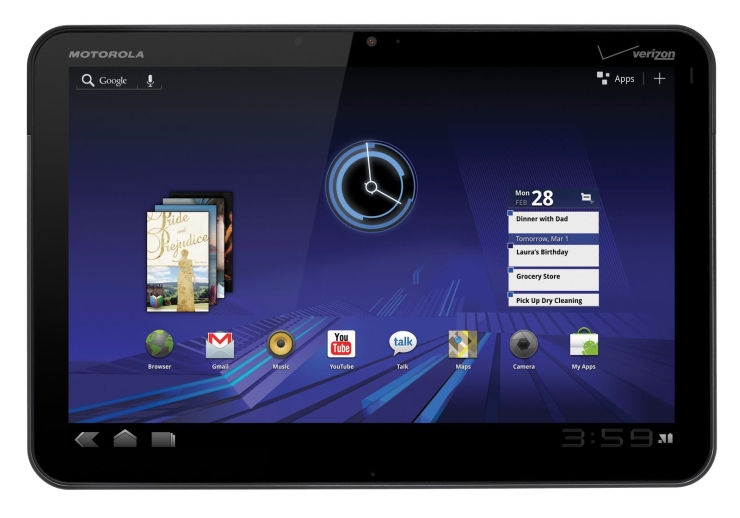 Google announced today an agreement to buy Motorola Mobility for the princely sum of $12.5bn, a ~60% premium on share value at the close of play on Friday, in a move they say will 'supercharge the Android ecosystem'. Mobility is Motorola's mobile devices division, which was spun out into a separate company in January of this year, and includes their handset and tablet range of hardware, IP and (potentially most valuable of all) patents. Having moved to the Android platform early Motorola was regaining market share lost when it failed to jump on the digital bandwagon as swiftly as some of its' competitors, but the uptake of their most recent devices hasn't been quite as wide as they'd hoped. The deal pretty much instantly gives Google the scope to begin releasing Android devices of their own in the coming months, and have a more direct hand in hardware development than ever before. Furthermore as the patent wars over smartphone and tablet devices heat up this assures that Google, and by extension the Android platform as a whole, will have additional ammo to fight their own particular corner against Apple/Microsoft etc.

Google's Android partners had this to say about the deal, clearly singing from the same hymn sheet -

"We welcome the news of todays acquisition, which demonstrates that Google is deeply committed to defending Android, its partners, and the entire ecosystem." - Peter Chou. CEO, HTC Corp.

When speaking to CNET Google senior vice president Andy Rubin reaffirmed that "[their] vision for Android is unchanged and Google remains firmly committed to Android as an open platform [..]", and that they "[..] will continue to work with all of our valued Android partners to develop and distribute innovative Android-powered devices." Unknown is what this means for Motorola Mobility in the long run; conceivably Google could merely use them as a useful cache for their patents rather than allow them to continue to operate as a manufacturer, though that would surely be an odd decision.

The deal follows a recent partnership agreement between Nokia and Microsoft, and may not be the last major deal we'll see in the mobile computing market this year. Other players are well known to be particularly cash-rich currently and the chance to buy-up some juicy patents and/or market share will be very difficult to resist.