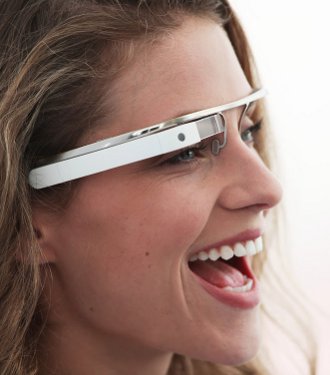 You may not have heard of Google[x], Google's Top Secret laboratory said to be working on various areas of blue-sky research for the tech products of tomorrow such as the self-driving or space elevators. Just from those two examples you can see that they tend to work on idea's of the mundane to the ridiculous, but it wasn't exactly clear which end of that particular spectrum their latest announcement came from.

Project Glass was revealed on Wednesday as a speculative technology leveraging two distinct technologies: context-sensitive search/information retrieval and miniaturised dispay technologies. The fusion appears to be something out of Star Trek: a clear OLED panel attached as a set of glasses which overlays information on what the user is seeing and other notifications. Google's intro video to Project Glass explains it pretty well:

(Here's a fun thought: try and count how many of the systems shown in that video are patented by either Apple, Google or another corporation. Even if technologically feasible, would patent litigation kill the product before it could ever come to market?)

It's a fascinating idea which 10 years ago would have seemed outlandish but now well within reach. The OLED panel tech isn't that far away, more being a question of resolution than anything else. Google has been doing context-sensitive search for years. Voice recognition, navigation, notifications - they're all a staple of today's smartphones. In fact, the question is why isn't it here now rather than just being mooted by a big tech. company?

Those wanting to keep abreast with Project Glass, or perhaps even have some input into the project, can add it to their GPlus circle here. If I might make a suggestion: propose that context sensitive ads are kept out of your peripheral vision, or the Project entirely.

Assigned tags:
Google
Please share your thoughts by commenting below!