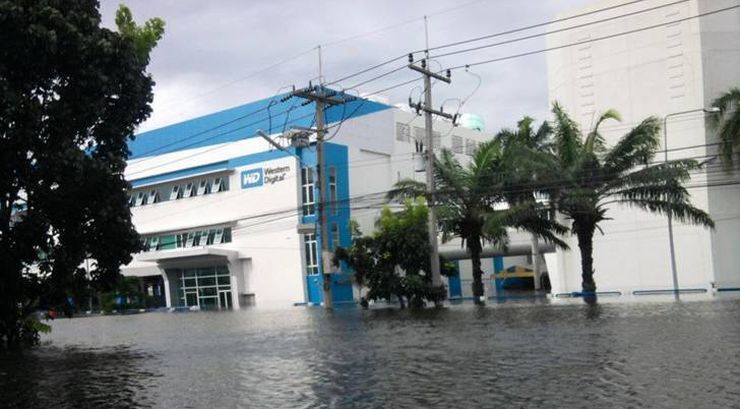 Those who sought to upgrade their storage capabilities in the past two weeks will be well aware of the recent and continuing increase in HDD pricing, to the extent that the cost of some popular high-capacity models have more than doubled. Of course this is mainly down to the recent flooding in Thailand, where HDD component manufacture and assembly are agglomerated into a relatively small geographic area. The shortage has become so bad that consumers have started resorting to drastic measures - cracking open still-cheap external hard drives, using spare IDE drives or even buying from brick-and-mortar retailers who are somewhat insulated from the spike in pricing due to high stock levels.

It had been anticipated that the increased pricing would be very temporary, though it appears that was expectation was hope triumphing over evidence. Even after the plants are cleaned out, the clean-rooms within which components are manufactured and drives are assembled will need to be rebuilt to comply with the stringent requirements for modern electronics. The reality on the ground appears to indicate a protracted shortage rather than short-term blip, the impact of which could be ameliorated by surplus stocks.

Industry analysts IHS iSuppli and IDC have attempted to gauge the impact of the floods quantitatively and assess the medium-term ramifications. They made some key assessments about the shortages and the impact they will have.

* IDS Predicts that 75% of Western Digitals production will be suspended for a short time.
* IHS iSuppli said hard drive shipments in the fourth quarter of 2011 will decline by ~28% to 125 million units, from 173 million in the previous quarter.
* IHS iSuppli and IDC have predicted that the overall market shortage due to factory flooding in Thailand will reach 25% to 28% over the next six months.

Sadly the report is somewhat underestimating the impact on consumers; mentioned 10% price increases have ballooned to 100% hikes by the time drives reached end-users. This may be down to wholesalers prioritising system-builders and enterprise customers over retail HDD consumers to a greater than anticipated extent. Perhaps most worrying of all it that the buffer of drives in storage should have reduced the impact of floods on market prices, but due to speculative buying have only had a negligible effect.

Pricing for external HDD's and Laptops will begin to be affected by shortages in early 2012, increasing accordingly. On the flip side Solid State Drives, which relatively recently decreased below the £1 per Gigabyte threshold, have become increasingly competitive and now appear to be a competitive alternative for many users who previously wouldn't have contemplated such an upgrade.

Have you been affected by the price increases? Do you have any tips for those in need of cheap storage? Let us known in the forum thread below.