The Colossus can record component video (YCrCb) and HDMI at resolutions up to 1080i from video game consoles, cable TV and satellite set top boxes, making it perfect for those wanting to record their favourite high-definition content straight to their PCs hard drive. 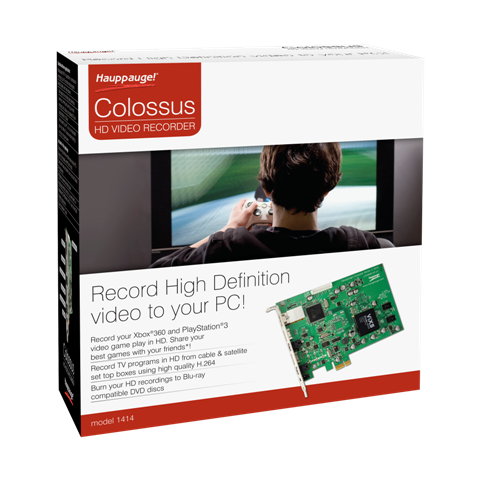 We have had phenomenal success with our external HD personal TV recorder, the Hauppauge HD-PVR. Due to high demand we have now released an internal version of this product and included an HDMI input so that users can now record directly from any un-encrypted HDMI source too. The bundled Hauppauge WinTV v7 application ensures you stay on top of your favourite TV programs and shows, by allowing you to automatically schedule recordings of your favourite programs, be it a one off program or an entire series," said Yehia Oweiss, Hauppauge Digital's Vice President of Sales EMEA. Colossus enables gamers to now have an integrated solution built into their desktop PCs. They can continue recording their gaming results and techniques and share their best game play action from their Xbox360 or PlayStation®3 game consoles with their fellow gamers to show off their gaming skills, Oweiss continued.

Colossus users are able to build their own personal media library of their favourite TV programs by simply recording them in HD and then burning them onto a standard DVD disk in high-definition. The Colossus also features a built-in IR blaster so users can automatically change TV channels for scheduled recordings.

Colossus is supplied with Arcsoft Showbiz software, which allows video editing including adding effects, transitions, timeline editing and the ability to burn to DVD or upload directly to YouTube.

The Colossus connects to any component video equipped HD set top box and also has standard definition composite input, providing users with the option to record their old home video tapes and then burn them onto a DVD.