HIS today unveiled its Secret Weapon  the HIS 6850 IceQ X TURBO & 6850 IceQ X graphics cards. The new HIS 6850 IceQ X Series is equipped with performance-leading cooling technology and silent configuration, allowing enthusiastic gamers to experience a totally new immersive gaming experience.
The new HIS IceQ X Series cards significantly control their temperature by expelling the hot air directly out from the central fan to cool down the GPU and graphics card. Both cards are equipped with the same 1GB GDDR 5 memory, with the IceQ Turbo version featuring a maximum core clock speed of 820MHz and a memory clock of 4,400MHz.

Key Features and Advantages of the HIS 6850 IceQ X Series:

Faster - Make your Overclocking dreams comes true!
The HIS IceQ X Turbo models are bios-overclocked out of the box.

Cooler  The HIS 6850 IceQ X Series is over 13°C cooler than the Reference Cooler. Equipped with 4 heatpipes, the HIS IceQ X Series optimises cooling performance by removing heat from the core area, providing the ultimate solution for professional gamers and HTCP users.

Quieter  The HIS 6850 IceQ X Series is over 7dB quieter than the Reference Cooler to significantly reduce noise levels.

AMD Eyefinity Technology
Run up to 3 displays from a single graphics board and expand your gaming field of vision across all displays. Enjoy the ultimate immersive gaming experience with innovative "wrap around" multi-display capabilities.

ATI Eyefinity technology requires one panel with a DisplayPort connector to enable the third display. A DisplayPort to DVI dongle is required for panel with DVI connector.

For more information about the HIS 6850 IceQ X range visit:
www.hisdigital.com 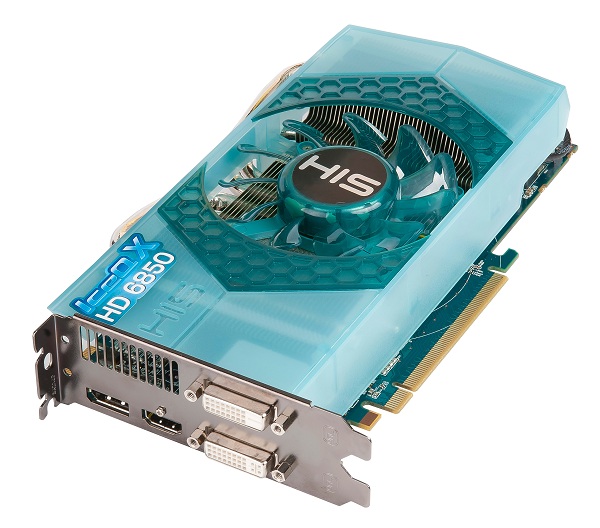