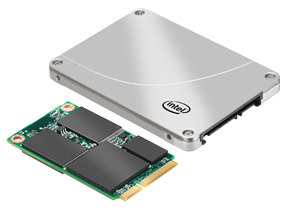 In a rather quiet launch, Intel have made available product pages for the diminutive 313-Series of SSD's. Based on Intel's cutting edge 25nm SLC NAND technology, the 313-series replaces the 20GB 311-series which took advantage of 34nm NAND of the time. Modest performance figures indicate the very specific role these drives fill: caching Reads and Writes using Intel's Smart Response Technology.

Both 20 and 24GB drives will be available in standard 9.5mm 2.5 inch form factors, aswell as the mSATA style compatible with many Ultrabooks and upcoming Z7X-series motherboards demo'd at CeBIT and CES. The 20GB model has sequential read/write rates of 220 MB/s / 100 MB/s; the 24GB model drops to 160MB/s read but improves write rates to 115MB/s. IOPS performance dip slightly below those of the 311-Series they are replacing at 37k/3.3k and 33k/4k read/write respectively.

However focussing on these figures somewhat misses the point - the drives use Single Level Cell NAND which is significantly more reliable and long-lasting than the much cheaper MLC seen in most consumer-level drives, a wise choice when caching writes especially. Understandably, they don't come cheap: the 20GB models will retail for $120 and 24GB for $150, with no difference in price between the mSATA and 2.5inch variants.

Expect much more of a fuss to be made over these drives in the next month or so when new Z77 motherboards, that can take most advantage of these new products, are expected to be launched.