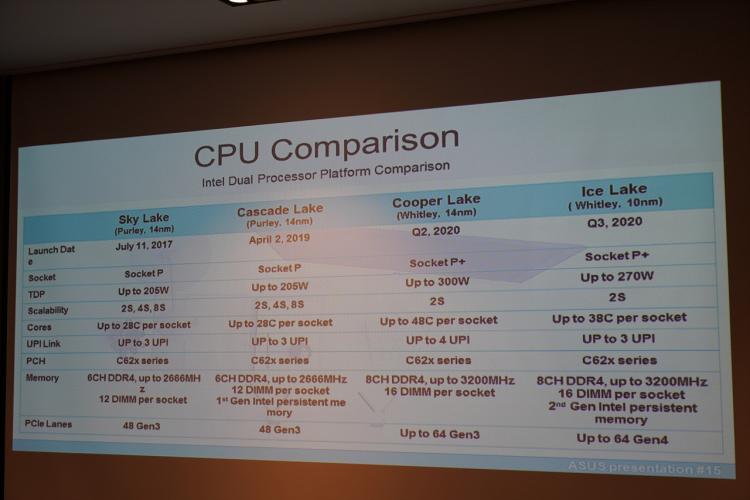 While Intel appear to be skipping Ice Lake on the consumer desktop market for the time being, it appears that the much more valuable enterprise server segment will be receiving a 10nm update in the not too distant future. A leaked slide arriving from Korean publication Brainbox via Tomshardware details an upcoming overhaul to the Intel Scaleable Processor platform, including two architectures that will mix mature 14nm and more advanced 10nm parts in the same product portfolio.

The first half of the stack is Cooper Lake-SP, the putative successor to Cascade Lake-SP on Intel's 14nm process. It will herald the new Whitley platform, a successor to the now long in the tooth Purley, and support up to two sockets with 48-cores per socket. That's a thumping amount compared to Cascade Lake-SP which maxed out at 28 cores per socket (although the Cascade Lake-AP platform already supported as many as 56 cores on a single multi-chip package), but the latter's support for up to 8-socket configurations may mean that it will continue to have a place in the medium term.

More cores inevitably mean higher TDP, and with 48 cores Cooper Lake-SP chips will max out at 300W. The underlying socket also changes slightly - Socket P+ rather than Socket P, which might hint at backwards compatibility with older CPUs rather than a wholesale exercise in obsolescence. Memory support improves with the introduction of up to 16 DIMMs per socket and DDR4-3200, the number of PCIe 3.0 lanes increases to 64, and the number of UPI links between each socket increases to up to 4.

The more exciting news however might be Ice Lake-SP, a brand new architecture manufactured on the 10nm process. It will co-exist with Cooper Lake, offering both PCIe Gen 4 support for the first time and 2nd Gen Intel Persistent Memory (i.e. Optane) but not quite as many cores per socket. Cooper Lake- and Ice Lake-SP will share the Whitley platform, utilising the same C62x-series Chipset PCH.

While Intel's Core-X enthusiast HEDT platform has been based on their Scalable Processor range in the past, it's premature to assume that derivatives of these designs will make their way into the hands of even high-end consumers any time son. There's just too much money to be made in the server market right now, even with AMD making inroads.

We shouldn't have all that long to wait before official information is released on these products. The slide states that Cooper Lake-SP will have a launch date of Q2 2020, whereas Ice Lake-SP will be unveiled in Q3. Computex 2020 and Intel's calender of Summer events should be ones to watch.