Yesterday, an updated Intel Material Declaration Data Sheet (MDDS) was released on their web site (see here) that includes a new CPU by the code BXC80623I72700K (designed for Chinese market) and BX80623I72700K. These codes translate to a new Core i7 CPU with the model 2700K. 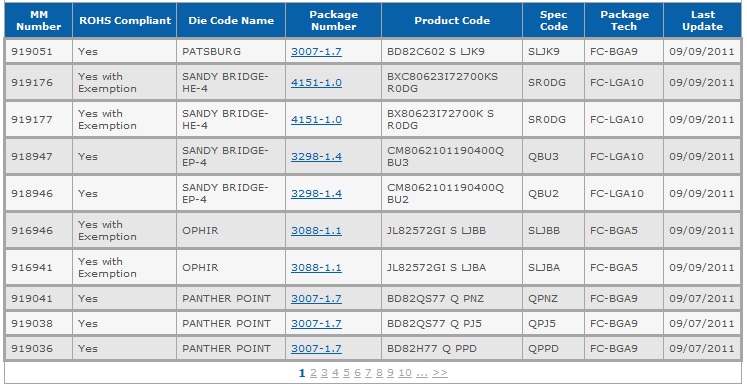 We can expect the CPU to have 4 cores, Hyperthreading support, and a clock speed in excess of the 2600K. The K also signifies the CPU will have an unlocked multiplier, and so will be aimed at enthusiasts. It's possible the clock speed jump will be at least 100MHz, giving a 3.5Ghz base clock and a Turbo frequency of 3.9 GHz.

Release is expected to be Q4 2011, which by no coincidence, coincides with the latest information regarding the launch of AMD's new FX CPU lineup that are expected to take on Intel's so far unchallenged, Sandy Bridge platform. The new 2700K should be expected to replace the i7 2600K and so will come at a similar price point, so around £230-£250 could be expected.

As more information surfaces, we'll have the latest here at Vortez.

Assigned tags:
Intel, i7, 2700K
Please share your thoughts by commenting below!