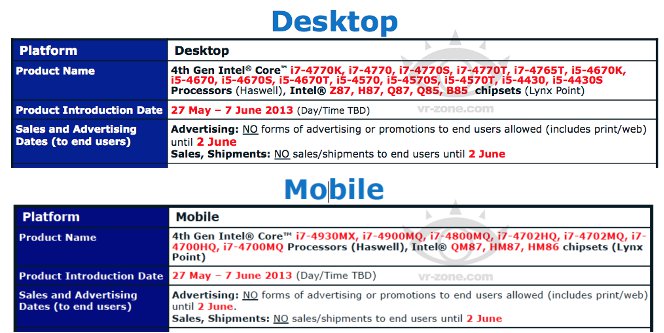 A report via TechPowerUp has quoted leaked Intel slides discussing (in general terms) the launch procedure for their upcoming range of Haswell Desktop and Mobile lines. Citing a wide range of mainstream parts - including the high-end unlocked Haswell Core i7-4770K and associated LGA-1150 motherboards - the slide posted on VR-Zone lists a Product Introduction Date of 27th May 2013, with advertising and end-user shipping to start no earlier than 2nd June.

Earlier reports pegged the release of Haswell closer to Q1 or early Q2 (i.e. April), mirroring the 2012 release of Ivy Bridge CPUs. Unlike Ivy Bridge however, Haswell CPUs and Socket 1150 motherboards will be released simultaneously as compatibility with previous generations will not be a factor.

If this is a delay, rather than media being slightly over-zealous in their assumptions, the rationale could be varied. Certainly there is no real competitive pressure from AMD to push out new designs in the desktop space, and the relatively lukewarm reception for Windows 8 last year may mean that inventory levels of Ivy Bridge remain high.

Demand for the new CPU will of course depend on the features the platform bring over Sandy Bridge systems, especially in terms of speed, which can't really be assessed until closer to the release date when more solid information is reliable. If the expected 10% boost over Ivy Bridge does bear out Haswell may well be a much more attractive option than its predecessor turnout out to be.