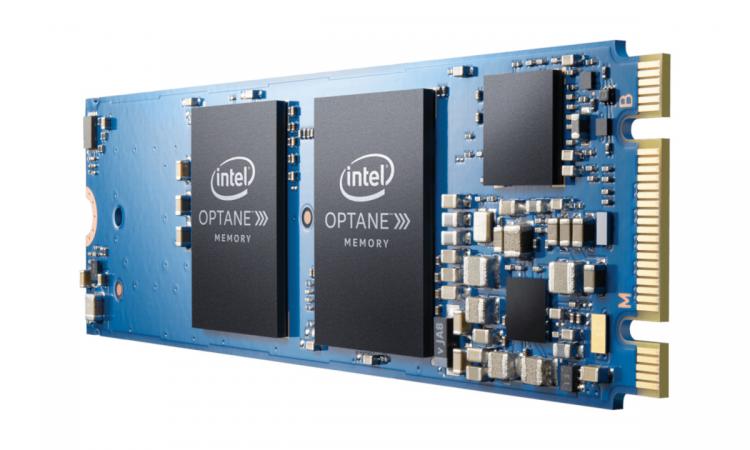 At Computex this year Intel, caught on the back foot somewhat by announcements from AMD, fought back with 10th Generation Mobile 'Ice Lake' CPUs and a new flagship Core i9-9900KS CPU featuring 5GHz all core turbo. Alongside a mobile product portfolio that looks set to be strong this autumn they also revealed Project Athena, a revised approach to laptops which emphasises better experiences on the platform such as higher responsiveness in a clearly defined manner. That said, one other aspect of their core business which received some attention is storage.

Available in 16, 32 and 64GB capacities, the M15-series of NVMe M.2 drives are a substantial improvement over the M10-series in terms of performance specifically. It upgrades the connector to support four lanes of PCIe 3.0 rather than two, increasing the upper limit of available bandwidth. Across all capacities read and write rates have improved to reflect this (now reaching up to 2000MB/s read & 900MB/s write), and synthetic IOPS specifications (a critical metric for caching/system accelerating drives) are more than doubled in some cases (peaking at 450K 8GB Span Random Read IOPS for the 64GB variant). The drive also reduces read and write latency compared with the M10 series for a new product that's comprehensively better than its predecessor. The only clear drawback indicated in the specifications provided is an increase in power draw when active (balanced by lower idle power draw).

Intel Optane memory compatibility is currently exclusive to modern Intel system. Pricing hasn't been revealed, but these new designs should be available alongside the new 10th Generation Ice Lake laptop models set for release in Q3 2019.