Intel Post-Haswell CPUs To Be Soldered Onto The Motherboard?

The latest piece of news which has sent the tech space all a-twitter is the rumour, from Japanese site PCWatch and via XBitLabs, that Intel will be ditching the LGA surface mounting method and moving to BGA from Broadwell onwards. If true this could represent a major change for system builders and motherboard partners, with consequences which should echo through the industry, eventually heralding the death of the enthusiast segment. Or it may not. Lets unpack the rumour a little.

Intel has been using Lang Grid Array surface-mount packaging in desktop CPUs since the Core2Duo days of LGA775. Rather than hundreds of pins (as with Pin Grid Array) the backside is composed of hundreds of pads, which make electrical contact with spring-loaded pins from the motherboard socket. As you move to thousands of contacts on a CPU the benefit with respect to reduced CPU fragility and CPU substrate size is significant, with the slight trade-off of motherboard sockets becoming less robust. As the motherboard is typically the lower-cost component this is generally a net gain for the consumer and industry as a whole.

Ball Grid Arrays (BGAs) replace traditional pins on the CPU with tiny balls of solder. The CPU is then soldered directly on to the motherboard PCB, fixing it in place and allowing it to benefit from better heat conduction and lower impedance. This has been the method of choice for fixing memory chips to RAM DIMM PCBs, and is also most often used for self-contained systems such as tablets, smartphones and some laptops. Were it to be extended to desktops the motherboard and CPU would be sold as a package rather than individually, and RMAs would also be catered to by returning the whole package.

To provide some context, Broadwell is the codename for the successor to Haswell, which in turn will be Ivy Bridge's successor some time next year. Haswell is still on line to use LGA 1150, and will be a significant architectural change whilst continuing to use Intel's 22nm process. In theory, Broadwell should merely be a die shrink to a 14nm process with tweaked architecture, but here is where things get a little muddy. 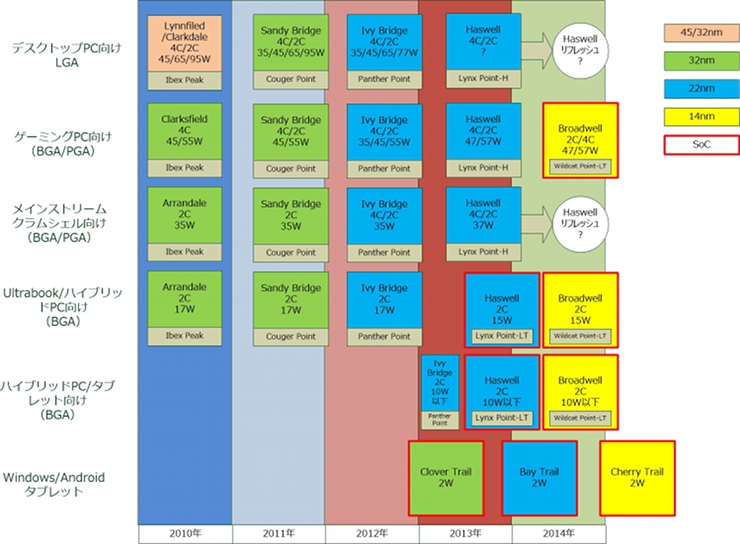 PCWatch, through the above image, indicates that Broadwell will only be available as a BGA, System on Chip package. If true this indicates a far more drastic change than a mere die shrink, and may reflect Intel's repositioning in the tablet, smartphone and laptop industry. SoC designs are typical in these spaces as a means to increase system integration, reduce power consumption and bear down on cost; sealed unit designs also allow the package to take full advantage of the benefits of BGA. The question is, why do this in the desktop space?

PCWatch's slide however does not indicate that this will be the death of the desktop. The most you can assume is that mobile packages which already use PGA/BGA will move to a Broadwell SoC design and will hence impact mobile designs the most. Under this scheme Haswell will continue as the mainstream/enthusiast desktop platform for longer, presumably until Skylake on 14nm comes to the market in 2015. The litmus test will be whether Skylake is LGA or BGA. Tech sites have taken this to mean that Intel is ditching the concept of motherboard and CPU as separate entities for the end user, with the consequence of attempting to kill off the desktop.

That said, what happens if the mainstream desktop platform turns to BGA? For the majority of end users, not very much - the vast majority of consumers buy pre-configured or OEM desktops and the most they may ever face as a consumer is installing RAM or a GFX card. Even enthusiasts tend not to change CPUs, as evidenced by IvyBridge's release where very few moved from SandyBridge K processors to an unlocked IVB. The impact on the motherboard industry however would be significant.

Inventory management would become a nightmare for motherboard manufacturers, and they would need to drastically reduce the range of motherboards offered. Pairing a CPU to a motherboard at this stage in the supply-chain would be a recipe for increased shipping/handling/soldering costs and reduced consumer choice by restricting SKUs the AIBs could offer. The amount of pressure Intel could exert on them would also increase as it makes the partners reliant on CPU stock, just as it is rumoured to have done in the case of NVIDIA GPUs.

One additional potential consequence for the end-user is also allowing Intel to finally kill off overclocking on the mainstream platform and relegate it to the high-end, LGA-2011 equivalent. For some time Intel has been restricting this potential added-value, and such a move would provide them the leverage to end it entirely.

Alternate readings of the article have already entered the one could make from the article. There have been claims of a mistranslation, and that the main points of the article should read as follows:

-- Intel will not provide new products for Desktop and non-BGA laptop segments in Broadwell era
-- Instead, they will provide higher clocked Haswell for those segments in 2014
-- Broadwell is "more than tick", and it will include some technologies that were previously planned for Skylake
-- This is because Intel needs to be more competitive in the tablet market, and this may mean the end of Tick-Tock strategy
-- It mentions nothing about Skylake and later or if they will be LGA or not for the desktop

This reading dovetails with the leaked information PCWatch presented in the diagram. It effectively means that the desktop space will undergo relatively little development in the Broadwell, perhaps limited to a multiplier bump or two, while Intel focusses it business on the mobile marketplace. Lukewarm IVB sales on desktop makes extending the lifespan of Haswell a relatively risk-free proposition and allows them to retain chips at launch for the high-end mobile sector. Skylake could then take over as the mainstream desktop platform into 2015, depending on market conditions.

It's also worth noting that this article made no mention of Broadwell-E, which recent slides said would be compatible with LGA-based sockets from the Haswell motherboard generation. Although costs would increase, enthusiasts could migrate to the workstation-orientated platform if they value the flexibility so highly.

Whatever the nature of Broadwell, this is unlikely to be the first throes of the end of the desktop PC; there's too much money and too many businesses invested in it for it to die off any time soon. Gamers will still want their gaming rig, corporations will retain a need for high and low-end workstations. We can't neglect the possibility that Intel is seeking to use their current dominance to exert even more influence, but presupposing AMD can survive in the x86 market for that long it would be well placed to pick up the spare demand.

« Check out the Battlefield 3: Aftermath Launch Trailer · Intel Post-Haswell CPUs To Be Soldered Onto The Motherboard? · Far Cry 3 performance boost just one of the features of the latest GeForce Beta driver »