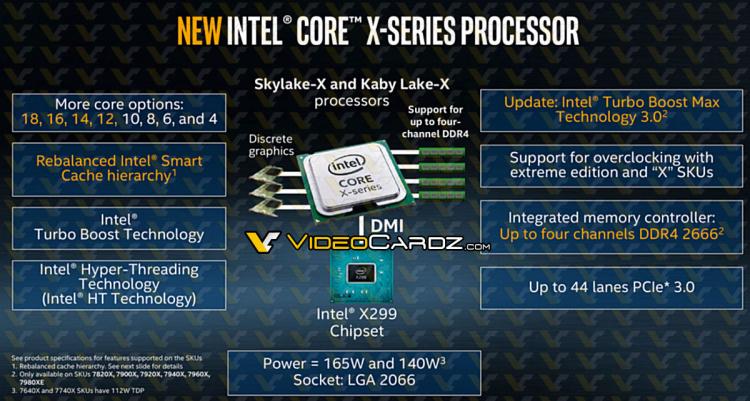 News coming out of Computex2017 is still very much in of unconfirmed and preliminary status, but if Videocardz.com's sources are to believed then Intel are more than ready to take it to AMD's Threadripper High End Desktop platform this summer. Leaked information indicates that Intel will be replacing Haswell-E with a Skylake-X platform which will range all the way to 18 physical cores and 36 threads, conveniently one-upping the 16-cores on the top-end Threadripper SKU.

The Core i9-7980XE will have 18 cores clocked on an LGA2066 socket which is paired to an X299 chipset motherboard. Exact specifications, including cache and operating frequencies, remain TBA but its likely that the TDP envelope will be around the 165W mark. Architectural changes in the evolution from Haswell-E to Skylake-X make performance difficult to predict, so independent reviews will be especially important this generation.

Beyond the flagship Intel will also be releasing other models which surpass the previous consumer and prosumer core counts, including 14 and 16-core models. Any model with six or more cores will gain the new Core i9 designation, indicating that it's a premium product for X299. Quad-core chips with Core i5 and Core i7 designations will also be released, but by all appearances will be more of a stepping-stone onto the HEDT platform which can be upgraded later.

Performance aside, the major fight between AMD and Intel will be in the release schedule and pricing. All Intel models greater than 10 cores currently have a release date TBA, whilst AMD have an only slight more useful 'Summer' timeframe for their Threadripper chips.