For anyone who doesn't know, Computex 2013 is currently on in Taipei and it is a hive of new technology activity. Intel has taken advantage of this to show off something a little different to all the rest, a 128GB thumb drive that plugs directly into a Thunderbolt port.

Thunderbolt technology was invented by Intel and can transfer data at a speed of 10Gbps which is about twice as fast as what USB3.0 is capable of. Despite Mac's and some PC motherboards being equipped with Thunderbolt ports there are still only a handful of peripherals that use it. It's a shame that it can take so long for people to adapt to great technology. Perhaps that is why Intel made this. 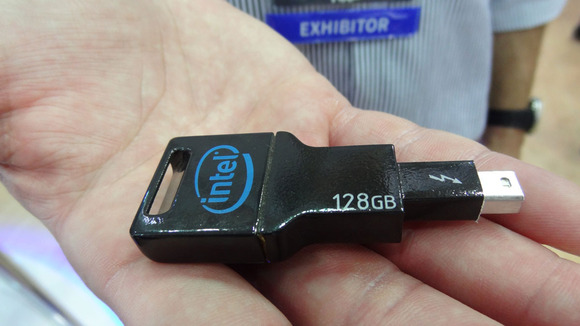 Moving on to more about the drive itself. It's equipped with a SanDisk SSD for storage and is just a reference design at the moment with Intel hoping that someone out there would be interested in building products based on it. However, Intel also announced that Thunderbolt 2 will be available in computers by the end of this year. Thunderbolt 2 doubles the speed of the Thunderbolt protocol to 20Gbps.

It's all very exciting in the world of data transfer.