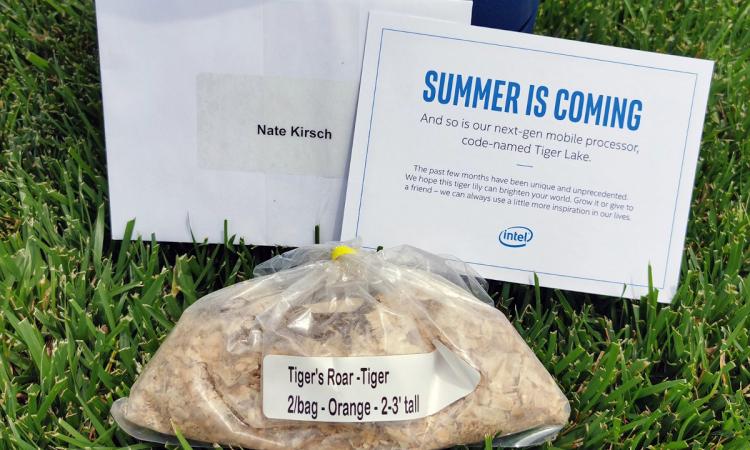 With the short term future of Intel processors on desktop solidified following the introduction of 10th Generation Core processors, attention is now switching back to the mobile space. The ecosystem, stomping ground of 14nm Comet Lake and 10nm Ice Lake CPUs over the past year, now appears to be getting an early advancement to the 11th Generation as Intel start teasing the new Tiger Lake mobile CPU architecture.

After a prolonged period on the 14nm manufacturing process Intel's roadmap appears to be accelerating once again. Ice Lake, which was demonstrated at CES 2019 and available from Autumn later that year, was the first Intel 10nm design to be produced en mass for the low power mobile market. It was joined by the first Comet Lake designs - a higher power alternative for notebooks requiring more performance, but without many of the architectural advances offered by its 10nm sibling.

Over the weekend Nathan Kirsch from Legit Reviews posted photos of a care package received from Intel teasing 'Tiger Lake', the next step in Intel's 10nm roadmap. The package contained a plant pot and tiger lily seeds, and is the sort of viral marketing that the folks at Intel's PR adore using to raises awareness of an upcoming technology amongst reviewers and influencers. And a call-out to summer means its very likely that an announcement is expected in the coming months, if not weeks.

Tiger Lake is the sort of technological step-change we would have expected Intel to reveal at a major event keynote, but the postponement of Computex 2020 will have necessitated alternative arrangements be made. An architectural reveal/launch is unlikely to mean design availability either. Actual product launches are likely not until holiday (Nov/Dec) 2020 at the earliest, potentially as the second generation of 'Project Athena' laptops.

It's anticipated that Tiger Lake will be Intel's third 10nm processor architecture, replacing Ice Lake in low power notebooks and mobile use cases. The latest Willow Cove core architecture is believed to be at the heart of the new processors, and it should be the debut of Intel's Xe graphics technology in their processor iGPU. Tiger Lake wafers showcased at CES 2020 indicated that at least one processor model will feature four CPU cores and 96 'Xe' graphics execution units, greatly improving Intel's raw graphics capability in the mobile space.

As exciting as this sounds, Intel's 10nm architecture will remain the domain of low-power systems for the time being. The next architecture expected on desktop and workstation systems is Rocket Lake, manufactured using an optimised 14nm process but with core and graphics enhancements that set it apart from 10th Gen. Comet Lake.