Leaked slides from an Intel presentation show that the new X79 chipset can be expected at the end of this year, some time in Q4.

Assuming the slides are genuine, the X79 chipset is a replacement for the X58 platform, and will be compatible with the upcoming LGA2011 Sandy Bridge-E processors, which are targeted at extreme and high end users. 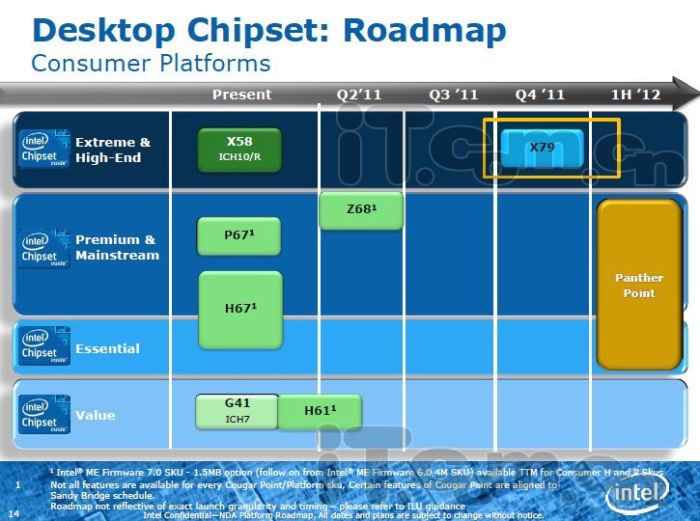 Further details on the X79 chipset are revealed in the slide below: 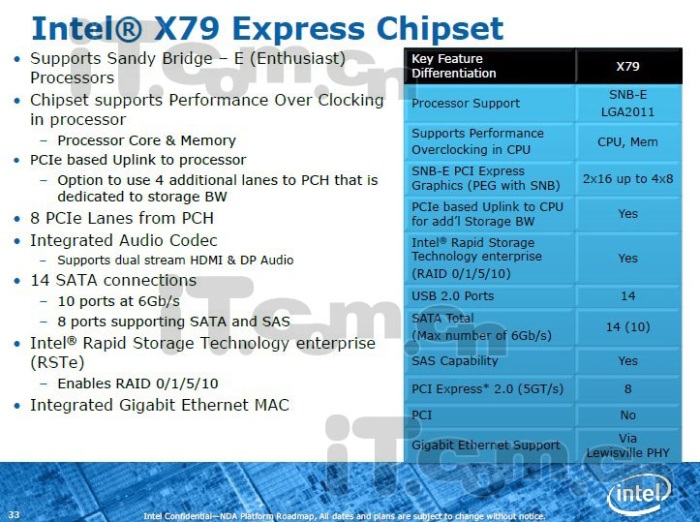 As you can see, the X79 offers a lot more than the recent P67 chipset. Optimised for the highest performance, catering for overclocking and a large amount of connectivity show that this is indeed the very high end. Impressively, there is support for 10 SATA 6 Gb/s devices, as well as the usual RAID offerings and even 8 ports compatible with SAS. There is also additional storage bandwidth unlockable through the PCIe uplink to the CPU. 2x16 PCIe graphics options and 8 PCIe laned from the PCH gives even more connectivity.

However, there are a few notable omissions, the first being PCI. There won't be any support for PCI devices, which, although most devices are available as PCIe versions, may upset some users clinging onto their high end sound cards or TV tuners, for example.

Secondly, there is reported support for 14 USB 2.0 devices, but no mention of USB 3.0. Could this be Intel trying to phase out the newest version of the all-ubiquitous Universal Serial Bus, in favour of their new Thunderbolt ('Light Peak') technology? That remains to be seen, but it certainly points towards the final details for this platform not quite being finished at the point of this presentation.

Once AMD's Bulldozer has finally landed, this will certainly be the platform all enthusiasts have their eyes on. We'll have to wait until nearer the end of the year for release, but we can surely expect a drip-feed of information until then. Stay tuned to Vortez, as we'll have it as it comes.

Please share your thoughts about this news in the forums. We are a growing community that we'd very much like all our readers to become a part of.