After plenty of speculation following leaks of Intel development documents, official (if accidental) confirmation of the existence of a Z390 chipset with updated Platform Controller Hub appears to have been made. Release notes for Intel Rapid Storage Technology v16.0.2 software include an up to date list of supported hardware, and alongside the latest H370, 310 and B360 designs sits said motherboard chipset, as well as a new HEDT X399 model.

Intel's current performance enthusiast platform for the desktop is the Z370 chipset, which was released in tandem with the first 8th Generation Coffee Lake CPUs late last year. This chipset is equipped with the Kaby Lake PCH, leading many to the conclusion that it was a stopgap until the Cannon Lake/Cannon Point PCH was ready for 300-series motherboards. To some, confirmation of this assumption came with the launch of new 300-series motherboards this month, properly tooled out with a new PCH.

The launch of these new motherboard models necessitated an update to Intel's RST software, unlocking support for the platforms. It's in the release notes for this update that the existence of Z390 finally has official confirmation, if not notification of a release date. Z390's listing also indicates that it shares the Cannon Pinnacle-H PCH with H370, B360 etc., and supports upcoming Cannon Lake CPUs (potentially arriving late 2018). 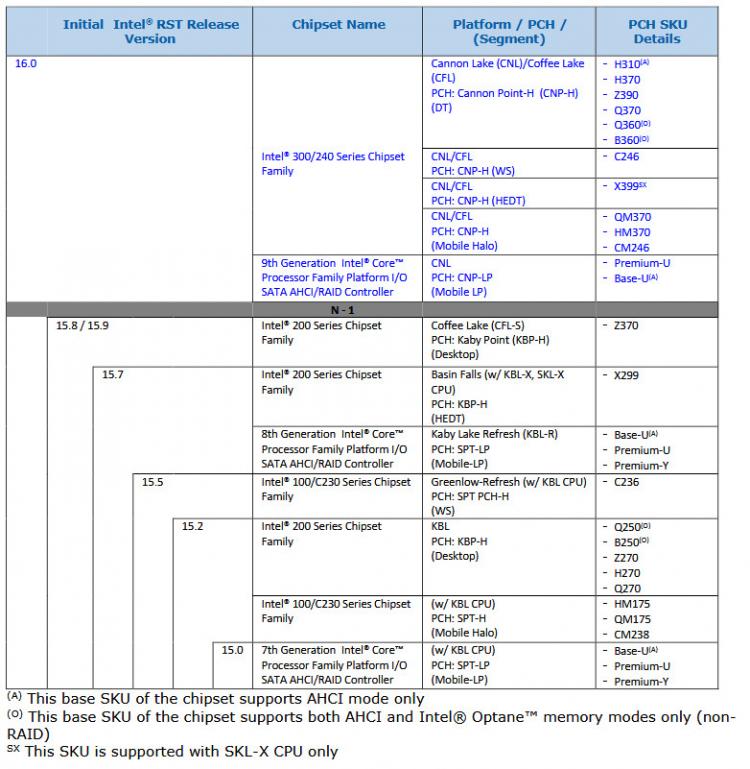 Also present in the release notes is the X399 chipset for Skylake-X CPUs. An upcoming release for the HEDT segment, it shares nomenclature with with AMD's X399 enthusiast platform rather than Intel's typical approach of skipping a series on HEDT. Explaining that difference clearly to consumers is going to be fun, so well done chaps.

This clearly unintentional confirmation means that Z390 will likely be launched in the not too distant future, perhaps at Computex in June. Meanwhile X399 may be the first time Intel have replaced a HEDT chipset within 2 years, but it's unlikely that Coffee Lake-X/Cannon Lake-X CPUs are on the cards unless Intel is feeling a significant amount of pressure from Threadripper. Hopefully we don't see a rehashing of the Kaby Lake-X fiasco.