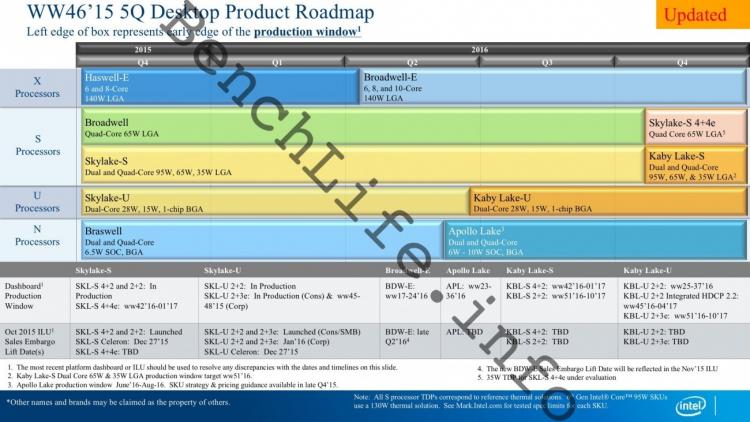 According to a leaked roadmap coming from Benchlife.info (via WCCFTech) Intel are planning their biggest enthusiast-level desktop CPU to date in 2016. Broadwell-E, the follow-up to 2014's Haswell-E High End Desktop platform, looks set to feature a flagship SKU with as many as ten physical cores, supporting up to twenty threads via Hyperthreading.

The roadmap (shown above) indicates that Broadwell-E will be released in Q2-2016, replacing the Haswell-E platform through a mix of 6, 8 and 10-core SKUs within the same 140W TDP envelope. It's likely that this is in part possible due to a process skrink to 14nm from 22nm, although the operating frequencies of the new CPUs aren't currently known. Xeon-class CPUs with high core counts are nothing new, but this will be the first time that 10-core designs will make it into the hands of the High-End Desktop sector.

Continued used of the LGA2011-v3 socket indicates that the CPUs will be backwards compatible with X99 in much the same way that Ivybridge-E continued to operate on X79, although updates to the platform to build in new features aren't off the cards. It's also possible that Broadwell-E will modify support for motherboard-level control of CPU voltages, unlocked first by ASUS in X99 through their patented OC-Socket.

Kaby Lake is broadly a replacement for Skylake, starting with the low-power Kaby Lake-U at the end of Q2-2016 and continuing with the mainstream Kaby Lake-S in Q4-2016. 200-series motherboards will continue to support LGA 1151 and Skylake CPUs, whilst Kaby Lake CPUs should also be supported by 100-series designs (perhaps in a manner which limits the overall featureset). The 200-Series update is billed as a means for Intel to introduce mainstream support for Optane high-speed storage technology (i.e. 3D XPoint Memory) in addition to Thunderbolt 3. The period will also see the introduction of a Skylake-S CPU that supports GT4e graphics.

Apollo Lake by contrast replaces the Braswell SoC platform. Dual and Quad-Core Braswell SoC solutions are used in a range of products including NAS and NUC designs, a quiet an unassuming workhorse. Apollo Lake, also due Q2-2016, is likely to incorporate an LPDDR4 memory controller, more meaty graphics hardware and expanded I/O.

As usual, take all the information presented with a pinch of salt; even if the leak is accurate roadmaps can change (often without warning).