Intel's 12th Generation Core processors codenamed Alder Lake-S are just visible on the horizon and may make it to desktop systems later this year, bringing with them a radical new chip topology and architecture. It's been strongly rumoured for a little while that the new generation will also incorporate a radical change in socket design - transitioning from a square LGA 1200/115x to a rectangular LGA 1700 - but with no engineering schematics to refer to little there's been little open discussion of changes to the cooler mounting system. Thank goodness therefore for Igor's Lab, who today dropped an excellent initial analysis on the socket with a little help from leaked construction drawings.

The entire preview article for Socket V - LGA 1700's internal codename - is well worth a read even outside of the native German. It breaks down how the new design compares to Socket H5 (the basis for LGA 1200 CPU installation), and also details an advanced Peltier cooler solution similar to the Cooler Master MASTERLIQUID ML360 SUB-ZERO designed for heavily overclocked Rocket Lake-S systems. The cliff notes are however as follows. 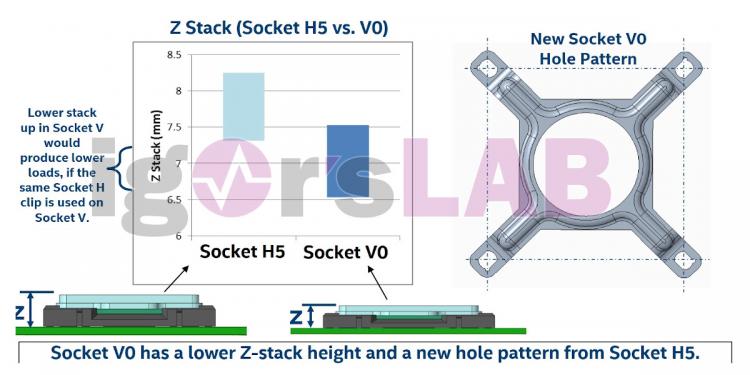 Socket V/LGA 1700, and Intel's successor generation that Igor's Lab refers to as LGA 1800, will have substantial mechanical differences from Socket H5 / LGA 1200 that will necessitate major changes to cooler mounting solutions:

The third is necessitated by the first two to ensure that older coolers are not re-used on the newer platform, but a more rectangular chip design also means that the location of the hottest part of the chip heatspreader will change, potentially having further ramifications. The mounting holes themselves remain symmetrical so the cooler itself should sit squarely on top of the chip centre.

For all intents and purposes this is the first major socket change to the mainstream desktop platform since the transition from LGA775 to LGA1156 in 2009 (minor changes to the keep-out zone and mounting pressure specifications notwithstanding). In many respects it's been Intel's most stable platform feature for the past 10 years, an aspect of the design that users have exploited to utilise a trusty high quality CPU cooler for multiple generations and system upgrades. 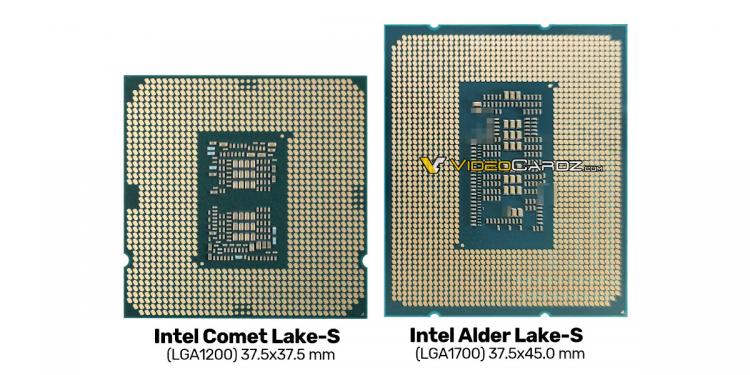 Old vs New, from Videocardz.com

It's not clear whether premium cooler manufacturers will simply be able to ship new retention apparatus for older coolers or if major redesigns are necessary; that's likely to be something that shakes out closer to Alder Lake-S's launch on a case-by-case basis. Premium manufacturers such as Noctua can usually be relied on to offer new mounting systems where possible, but that's not guaranteed. We would cautiously suggest that potential customers keep socket compatibility (and the cost of an appropriate cooler) in mind when the time comes to spec out a new system.