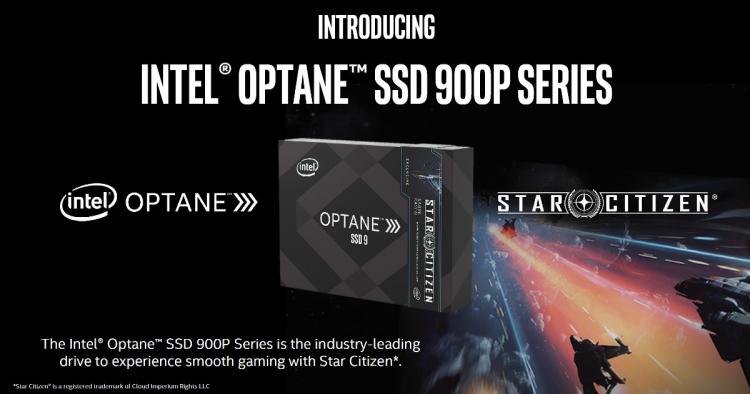 Planning on a new high-performance system this autumn and already have just the right PCI-Express SSD lined up? Well hold your horses  Intel is back, and Optane may just lure you away from the temptation of standard NAND.

Earlier this year Intel Optane Memory made its debut as a platform exclusive for 7th Generation Core Kaby Lake systems. Acting as a caching drive for system storage, it was intended as an intermediate upgrade for those with an affordable high-capacity mechanical HDD who want near-SSD performance. Seemingly however, it was only a matter of time before dedicated Optane storage made its way into the consumer space.

Today Intel are launching the first of their consumer-class Optane SSDs: the Intel Optane SSD 900P Series. Although already in place in the Enterprise sector, where the benefits of the technology are able to be more readily exploited, Optane storage has some intriguing advancements which will have ramifications in the mainstream for years to come.

As is often the case high-performance gaming and game development are serving as the early adopters ahead of mainstream consumers. To help them get a handle on developing Optane storage products for this market Intel partnered with Roberts Space Industries, developers of Star Citizen.

The most heralded aspect of Star Citizens goal as a videogame is one of scale. When launched it should feature three complete worlds in a sandbox universe, visible and explore-able in a way thats rendered fluidly and without loading screens. Theres one major problem with that: the sheer amounts data streamed from storage that has too large a footprint to be held in typical system (16GB) or video (4GB) memory capacities.

The quantity of streamed data is so high that storage itself becomes a bottleneck, and one thats not easy to overcome. In RSIs testing however Optane was 20% faster than equivalent SSDs, and 50% faster than mechanical HDDs. That, to put it mildly, is a big deal.

The Intel Optane SSD 900P is amazingly fast, easily the fastest drive I have ever used. Our Star Engine developers have been worth on technology to improve loading times using new techniques developed for Star Citizen and optimised for Optane, the fastest SSD weve tested with the game.

One of the additional development routes RSI are investigating is the potential for streaming uncompressed textures and other data, potentially freeing up other system resources by better leveraging the capabilities of Optane storage.

As an addition perk, Intel and RSI are offering both a copy of the game (which is currently still under development) and an exclusive in-game ship with retail purchases of the 900P. The ship  to be known as the Sabre Raven  is certainly in-theme as the fastest ship in its medium fighter class.

Optanes potential has been lauded since its unveiling over two years ago. The heart of the technology is 3DXPoint Memory Media, a technology distinct from NAND and developed in [url=https://www.micron.com/products/advanced-solutions/3d-xpoint-technology]partnership with Micron[/url. Prototype implementations boasted speeds approaching mainstream DRAM without even close to the same cost per gigabyte. Now that consumer versions are available we can finally see what that means in the real world, and how it shapes up compared to the burgeoning consumer PCI-Express SSD market.

Raw sequential Read/Write performance figures are often the first quoted, and in the case of the 900P Series are competitive with PCI-Express drives currently on the market. 2500MB/s Read and 2000MB/s Write are great, but somewhat put into the shade by the class-leading Samsung 960 Pros 3500MB/s Read and 2100MB/s Write (QD=32). That said, the 900P is just getting started.

Where the 480GB 900P really starts coming into its own is in raw IOPS. With a quoted figure of 550K Read IOPs it turns the tables on the 512GB 960 Pro, which can manage just 330K; a similar story is the case for Write IOPS as it achieves 500K compared with the Samsungs 330K.

However the Optane SSD really shines in write endurance. The 480GB 900P lists an endurance figure of up to 8760TBW, whereas the very best the Samsung 960 Pro is warrantied for is 1200TBW (and thats with the 2TB version of the drive). Its no wonder enterprise customers are so interested in Optane, and hopefully this will translate to some excellent reliability and long-term performance stability for consumers.

Intel put the 900P up against the Samsung 960 Pro in a battery of tests using the SPECwpc V2.1 IOMeter Test utility, indicating consistently superior performance across a wide range of workloads. On the face of it that sounds somewhat counter-intuitive, but Intel explain that superior performance at more shallow queue depths than the 32 typical of quoted performance figures is having a significant impact. Once again, 3rd party comparisons will be fascinating to read.

The potential benefits are in some cases staggering. Improved system processor utilisation thanks to faster storage for example can massively reduce rendering times, as shown above in a Houdini video rendering test. Houdini is an industry application with results that may not line up with consumer video rendering software, but it is nonetheless a stark reminder that some applications are still restricted by storage even after recent advances in the field.

At launch the Intel Optane 900P series will be available in two different form factors: PCIe Add-in Card and a 2.5 U.2 drive solution. The PCI-Express card variant makes use of four PCI-E 3.0 lanes, making it widely compatible with home and business systems that have an ATX or mATX motherboard and chassis. 240GB and 480GB capacities are available, and on both models an oversized heatsink indicates the cooling requirements of the drive.

The U.2 version meanwhile will at launch only be available as a 240GB drive. It will be shipped with the usual SFF-8689 connector cable for when the motherboard has a U.2 connector natively, and an adaptor system which would allow the cable to plug into an M.2 slot. Essentially, if your motherboard supports either U.2 or M.2, your system should be compatible.

There are currently no plans for a native M.2 Optane drive. Optane technology on the current process node is a 14W product, and would require some form of directed cooling to keep temperatures within optimum bounds. Intel are not ruling out the possibility of an M.2 solution in the future however, especially when the manufacturing node shrinks.

If additional capacity or performance is required then the Intel 900P can be RAIDed as required, in addition to being recognised like any other NVMe storage drive in terms of booting etc. 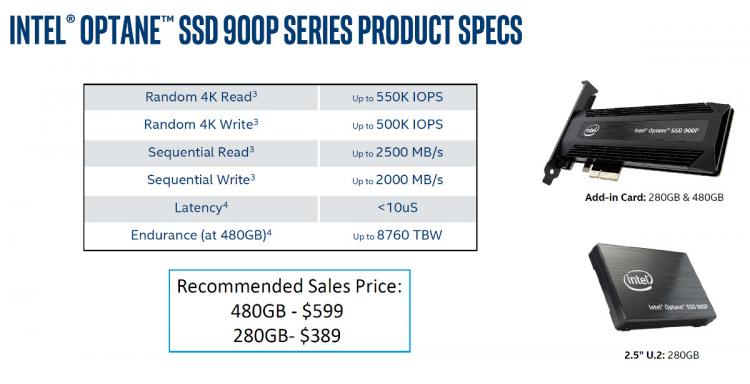