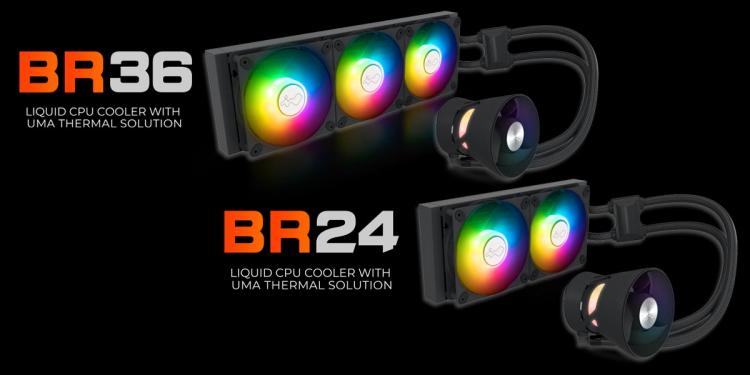 With outstanding AIO performance, the InWin BR Series is tailored for all PC users, especially for those that operate frequently with higher loads, such as gamers, designers, and content creators. High-density microchannel fins in the BR Series copper plate efficiently draw heat away from the CPU, minimizing the temperature delta to unlock maximum thermal headroom and overclocking performance. Its internal pump is designed to sit separately from the water block to minimize vibration and noise.

The latest high-performance CPUs can require motherboards to use active cooling on their VRMs, however, fans directly attached to VRM heatsinks are often small and noisy. The InWin BR Series AIO features an integrated fan blower specifically designed to push cool air down and over the VRM, memory and components around the CPU socket such as the M.2 SSDs and graphics cards installed into the top-most PCI-Express slot. The net effect is the Upper Motherboard Area (UMA) is cooler by as much as 35 percent. This enables the CPU, motherboard, and memory to have more thermal headroom, unlocking extra performance and extending the lifespan of the surrounding PC hardware. The integrated cooling fan uses a 4-pin PWM connector for accurate control and features an ARGB glow from its underside.

The ARGB lighting radiantly glows on the nine crescent-shaped blades bundled with InWin Luna AL120 fans, reflecting a soft glow into the system to highlight the PC build. With 16.8 million lighting combinations via ARGB LEDs, users can truly color coordinate their PC builds to complement other ARGB-enabled components around set themes. The Luna AL120 fans can sync with ARGB motherboard software from ASUS, Gigabyte, MSI, or ASRock, or the lighting effects can also be directly controlled using the bundled InWin ARGB One-Click LED controller. The fans are designed to be daisy-chained together with their short power cables to optimize cable routing.