Knuckle Down To Hardcore Gaming With the Tt eSPORTS KNUCKER

Tt eSPORTS, the pro-gaming arm of Thermaltake, have just announced their new gaming keyboard: KNUCKER. The KNUCKER is at first glance a standard sized keyboard with NumPad, though appearances can sometimes be deceiving. 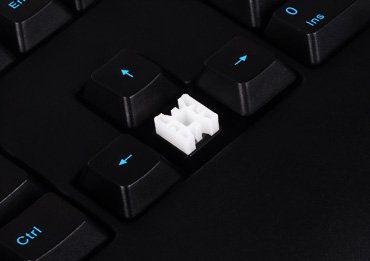 The KNUCKER features the Tt-Plunger switch design for its keys: a technology developed by Tt eSPORTS Key-switch Product Development workshop which simulates mechanical switch feedback whilst requiring less actuation force. Tt-eSPORTS claim that this mechanism makes for a more easy and comfortable keypress without compromising on providing the gamer with tactile feedback.

To complement the above gaming innovation Tt eSPORTS have also incorporated what they call 'S4Key Function', which allows the user to set the command repeat rate of the keyboard to one of four different modes. According to Tt eSPORTS this has been included due to a gaming behaviour called 'Repeat-Rate Rotating Movement', and is of particular interest to their pro-gamer Hermes in his Kart Rider racing competitions. Use of this function requires use of a PS2 interface.

Finally, the Tt eSPORTS aesthetics are present throughout the case, including red WASD and Arrow keys and an F12 key at the centre of the wrist-rest stylised as a Battle Dragon. Overall it's a striking keyboard which should have the durability and features required of a true gaming keyboard.

For more information on the KNUCKER pro-gaming keyboard visit: http://www.ttesports.com/products/product.aspx?g=feature&s=33

The latest updates of product and event news - available at Tt eSPORTS Facebook at https://www.facebook.com/TteSPORTS

« Scan And Antec Team Up For The Rush Hour Sale · Knuckle Down To Hardcore Gaming With the Tt eSPORTS KNUCKER · Audio With Bite? Razer's New BlackShark »