Will the GTX 1080Ti soon be consigned to the annals of GPU history?

The protracted delay (if you can call a series of missed rumoured launch dates for a product yet to even be officially announced a 'delay') to NVIDIA's next generation GTX 11-series GPUs is causing all sorts of strain on the hard-worked consumer technology rumour mill. Either no-one really knows when the GPU series will be launched and what form they will take, or the NDAs are so tight that not even an offer of the best coffee and cake in Santa Clara can coax the information free.

And so, with so little info publicly available, it's no surprise that even the sketchiest of rumours are jumped on with relief. Such is the case this weekend; published at WCCFTech is a photograph of a 3DMark FireStrike graphics result for an alleged EVGA GeForce GTX 1170, some juicy evidence that as a whole has as many red flags as the 2016 Formula One Season (three, for those counting at home). 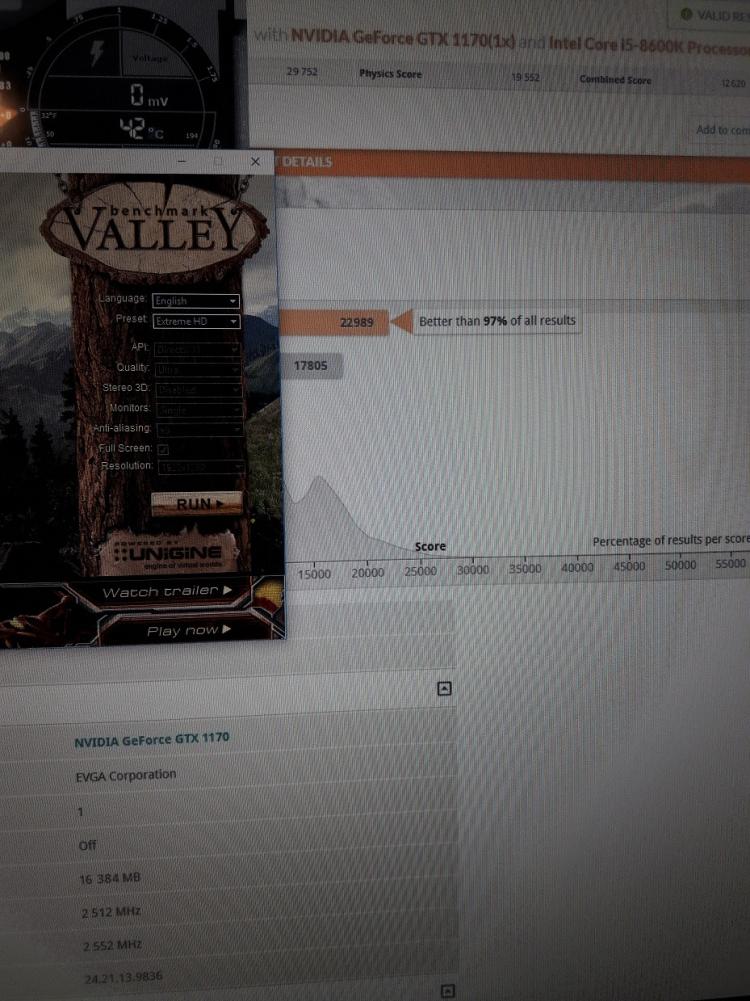 Taken credulously, the benchmark is extremely impressive. It gives the GTX 1170 a 3DMark FireStrike result of 22989, which it's helpfully pointed out is better than 97% of all results. If verified, it would be the fastest single-GPU result in the record-books, easily faster than the GTX 1080Ti and blowing anything that AMD have produced out of the water. Deeply impressive for a mid-tier card, and matching the performance bump of the GTX 1070 over the GTX 980Ti (~16500 vs ~15800 respectively in our tests).

On to the red flags. The first, and most obvious, is that it's a photo of the 3DMark FireStrike result and not even a screenshot. Neither is particularly difficult to fake however, but nor does it rule out the result's authenticity.

The second is the specifications of the GPU. Previous rumoured specs pegged the GTX 1170 at ~1860MHz, whereas this benchmark reports it as 2.5GHz. Even accounting for the transition from 16nm to TSMC's 12nm process, that's still around 500MHz higher than the maximum seen on the GTX 10-series at stock, and a good 300MHz faster than a heavily overclocked 10-series part. That being said, a huge core clock would go a long way to explaining the monster result.

Flag the third concerns the details of the result. The entry doesn't appear in 3DMark's database (which perhaps isn't all that surprising), but it's also odd that a pre-release graphics card is accurately reported by the application. Typically such GPUs are reported as 'Generic VGA', the device id not being present in 3DMark's database. It's possible that the protracted delay has allowed 3DMark to properly populate their database with GTX 11-series entries from 3rd parties ahead of time, but unlikely. Indeed, if they had then that itself would probably be major news.

While some outlets have treated this leak with credulity, up to an including announcing the death of AMD and GTX 10-series both, WCCFTech have rightly expressed caution. For our part, we agree that it should be taken with more than a mere grain of salt.

It's currently anticipated that the NVIDIA GeForce GTX 11-series will be unveiled at Gamescom 2018 (Aug 21st-25th), but by all accounts this will likely depend on depleting the stock levels of the GTX 10-series.

There are currently 731 user(s) online:
Google