In April a leaked Intel roadmap sent shivers through the industry as it showed a desktop platform lineup still predominantly on 14nm and with only 10 cores going into 2022. Today further information has been uncovered which puts even that performance criteria into doubt, just as rises to the ascendancy AMD on mainstream and high end desktop performance.

In 2020 Comet Lake-S is due, Intel's 10th Generation CPU for the mainstream desktop platform that replaces Coffee Lake. Current expectations are of a 10-core, 20-thread CPU on a new motherboard socket (LGA1200) and (400-series) chipset, manufactured with 14nm lithography, which seems like a reasonable advance over the Coffee Lake platform which has a current limit of 8 physical cores per chip. It may utilise the Sunny Cove core architecture currently seen with impressive IPC gains in Ice Lake mobile products, but that seems unlikely at this time.

Rocket Lake-S meanwhile is the successor to Comet Lake-S, due at some point in 2021. Prior to the latest leak our best information indicated that it would be a 10c/20t chip also produced on 14nm, which would almost certainly mean that genuine advances had been made in the core architecture over Comet Lake (thus justifying its existence). Now however perennial leaker @momomo_us has uncovered platform descriptors for Intel going into the next couple of generations, including Rocket Lake (RKL) and Tiger Lake (TGL). 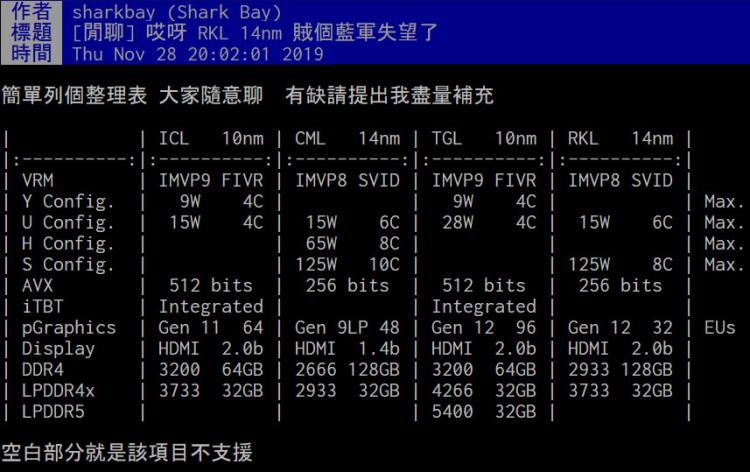 Two notable aspects stand out: Rocket Lake-S will only reach as high as 8c/16t, rather than the expected 10c/20t, and it will feature the brand new 12th Gen Graphics. Such a retrograde step doesn't bode well for the platform, even if IPC improvements are outstanding, given that TDP remains at 125W (the same as Comet Lake-S).

Furthermore Rocket Lake doesn't incorporate native AVX-512 support and hence hardware accelerated Deep Learning Boost, a feature Intel are heavily marketing on Ice Lake laptops and Cascade Lake-X HEDT CPUs, although there's a chance it's integrated into the 12th Gen GPU architecture. This combination of factors fairly screams that Rocket Lake-S is yet another 14nm stop-gap, following a handful of similar stopgaps since Skylake in 2015.

On the positive side, Rocket Lake-S may support PCIe 4.0, which would certainly be a plus. And an aside, its notable that both Ice Lake and Tiger Lake mobile parts appear to be maxing out at 4 cores, leaving a further avenue for attack open to AMD's Mobile Ryzen APUs.

Intel will need to answer some tough questions over the course of the next two years, from both the tech. press and their own shareholders. Their team of engineers, including the immensely talented Jim Keller (formerly Tesla and head of the team who worked on architecting AMD Zen), have their work cut out to overcome this period of stagnation.

There are currently 999 user(s) online:
Google