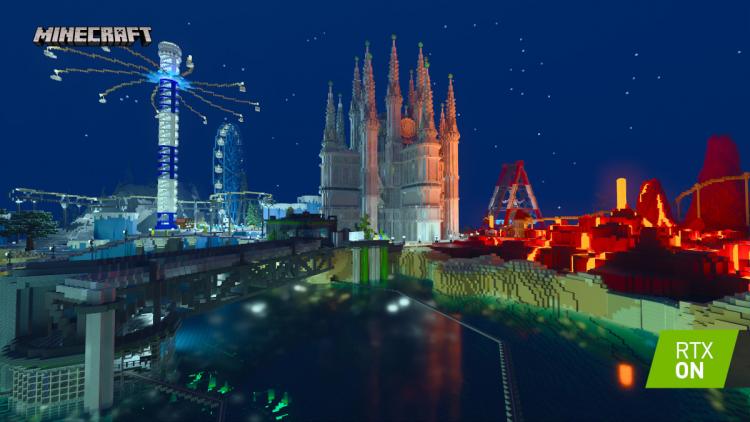 GeForce RTX features are coming to Minecraft tomorrow with the release of a new open beta build, and NVIDIA are ready on day-0 with driver-level support. The GeForce Game Ready 445.87 WHQL drivers are their first for the month, but arrive at an ideal time for the next era of the cube-based sim in addition to being replete with important optimisations to other major titles.

Minecraft's latest open beta, which rolls out on April 16th, incorporates a wide selection of new features that take advantage of NVIDIA's GeForce RTX toolkit. The new engine supports ray-traced global illumination, shadows and reflections, Physically Based Rendering (PBR), and path-based Atmospheric Effects as new toys for talented world-builders to leverage. Players in these worlds meanwhile can feast on the new visuals afforded by RTX in addition to performance benefits afforded by the integration of DLSS 2.0. A full run-down can be found at NVIDIA's article on Minecraft with RTX, but to sum up: it's certainly an exciting time if you're a creator with access to powerful hardware. 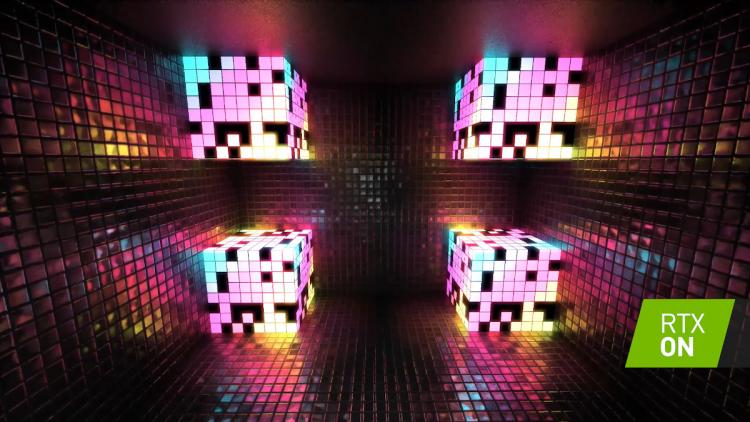 Per-pixel Emmisive Lighting Showcased in the Minecraft with RTX Beta

As if that weren't enough, NVIDIA are also rolling out optimisations for Call of Duty: Modern Warfare 2 Campaign Remastered, Saints Row: The Third Remastered, and SnowRunner. As always, any performance and stability improvements they can squeeze out of existing hardware is more than welcome.

One slight negative in this driver release are NVIDIA's continued issues with their Image Sharpening feature. A number of limitations apply which may not be clear without reading the release notes, potentially diminishing its value to users; hopefully that's not indicative of their driver team putting this feature on the back burner in favour of technologies only supported by RTX 20-series GPUs.

Tradition dictates that every driver should release with a long list of fixed and newly identified issues and 445.87 is no different. Most notable among the fixed issues noted is one for the DOOM Eternal black-screen crash, but a modest list of Windows 10-specific problems won't leave anyone with the impression that the driver are perfect.

To download GeForce Game Ready 445.87 WHQL drivers tune your browser to Geforce.com/drivers and run through the selection process for your hardware and OS install, or alternatively take advantage of the GeForce Experience App live update feature. The drivers are compatible with 64-bit versions of Windows 10 and hardware as far back as the GTX 600-series (Kepler Architecture).

Game Ready for the Minecraft with RTX Beta

Changes and Fixed Issues in Version 445.87

As with every released driver, version 445.87 WHQL of the Release 445 driver has open issues and enhancement requests associated with it. This section includes lists of issues that are either not fixed or not implemented in this version. Some problems listed may not have been thoroughly investigated and, in fact, may not be NVIDIA issues. Others may have workaround solutions.For notebook computers, issues can be system-specific and may not be seen on your particular notebook.

[Notebook][H-Clone]: With the integrated graphics processor as the clone source, display settings cannot be changed from the NVIDIA Control Panel. [200594188]

[Notebook][H-Clone]: With the integrated graphics processor as the clone source, display settings cannot be changed from the NVIDIA Control Panel. [200594188]
[Notebook][GeForce 1050 Ti MaxQ]: The screen displays corruption after waking from display off. [2859247]
[SLI][Doom Eternal]: Corruption occurs in the game upon opening the Steam overlay. [200593967]
(Battlefield 5, Destiny 2)[HDR]: With HDR enabled, the games appear too bright. [2909218]
[Monster Hunter World Iceborne]: Artifacts appear in the game. [2903858]
[Call of Duty - Warzone]: Freestyle does not work. (200593020)
[Forza Motorsport 7]: The curb may display a black strip during a race on certain tracks. [2781776]
[Zombie Army: Dead War 4][Ansel/Freestyle]: The Ansel & Freestyle tabs are unselectable. [2810884]
[Tom Clancy's Rainbow Six Siege][Vulkan][G-SYNC]: When playing the game in Vulkan mode with G-SYNC enabled, flickering occurs after switching the game between full-screen and windowed mode.[200578641]To work around, either disable G-SYNC or play using an API other than Vulkan

There are currently 425 user(s) online:
Google