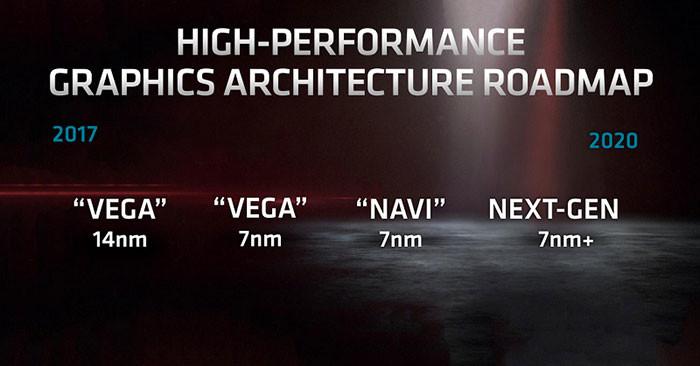 AMD's GPU Roadmap, as of presentations to investors in May 2019

In remarks made to Chinese press this week, a PR representative for graphics card manufacturer Sapphire allegedly spilled some information on AMD's upcoming Navi GPUs, a product line that's set to be revealed either at Computex next week or E3 in June. Chief among the facts revealed was news that two Radeon Navi graphics card models would be released in the near term priced at $399 and $499 respectively, going up against NVIDIA's GeForce RTX 2060 and 2070.

Navi will apparently be publicly demonstrated for the first time during AMD's pre-Computex livestream on May 27th, but a comprehensive launch won't be before July 7th. While they're being set up to compete with NVIDIA's mid-tier RTX series of GPUs, the new architecture apparently will not incorporate hardware-level raytracing to the same degree (nor, we suppose, DLSS and other deep-learning features present on NVIDIA RTX hardware). Performance therefore would need to be particularly compelling to sway consumers, even if the number of games supporting hybrid ray-tracing is relatively low as the market stands.

These products would also slot fairly comfortably within AMD's current GPU pricing structure. Residual stock of AMD Vega GPUs - Radeon VII aside - could occupy the <$350 market, while Polaris-based cards would continue to be their affordable option. Over time AMD could introduce more cut-down Navi SKUs into the mid-range and mainstream or, depending on cost, re-brand Vega and Polaris to occupy these positions.

While it won't be AMD's first 7nm GPU - that honour goes to the Vega-based Radeon VII - it's hoped that Navi will nonetheless reverse AMD's fortunes in this arena. As they did with the HD7000-series, AMD need to prove that they can be first to a new process node and deliver exceptional performance, but the red team's silence compared with bullish statements over Zen 2 lead many to fear the worst.

The Sapphire representative also reportedly put paid to rumours of a so-called 'Big Navi' GPU, i.e. one with more than 5000 shaders as opposed to the typical 4096 ceiling imposed by AMD's GCN family of architectures. The Radeon VII may be AMD's best prior to another architectural redesign currently scheduled for 2020.

Take these rumours with the traditional pinch of salt; Computex is often the time when crossed wires and misinformation is rife.

There are currently 138 user(s) online:
Google