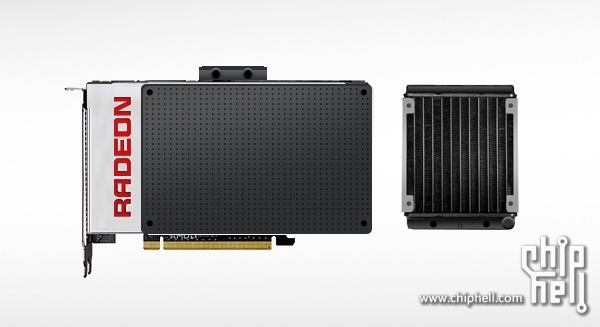 Detailed information on AMD's upcoming GPU refresh may be released in the coming weeks, but that hasn't stopped the steady trickle of leaks prior to an official reveal. Perhaps the juiciest thus far, apart from somewhat speculative benchmarks, comes in the form of two images from Chinese tech forum Chiphell proporting to show a new compact design for AMDs flagship model.

AMD's Fuji GPUs make use of stacked High Bandwidth Memory, the first in its class to do so. Not only does the new design greatly improve memory bandwidth, tripling perf/watt over GDDR5 and saving 50% power on a like-for-like basis, it also substantially reduces the amount of real-estate needed for memory chips. As a consequence the PCB can be smaller even whilst it packs in the equal or even greater quantities of RAM, at the 'expense' of increasing overall package thickness and concentrating components centrally, which has an impact on cooling.

What we know about HBM there gives credence to the images shown off. The PCB is considerably shorter, as short as some compact GTX 970 models, which naturally makes it idea for smaller system form factors. Cooling systems with 120mm radiators are now common in for CPUs and could be ideal for powerful yet small GFX packages. Use of a closed loop cooler would also neatly sidestep a major issue AMD has had in recent year regarding reference 'blower' coolers for their GPUs, namely that their performance and noise made them uncompetitive and greatly inflated the value of waiting for 3rd party designs from the likes of ASUS, MSI and GIGABYTE.

That said, the relative installation complexity and expense of a stock closed loop cooler may mean that this design won't end up being the sole reference design, even though they've already broached this concept with the Radeon R9 295X2. 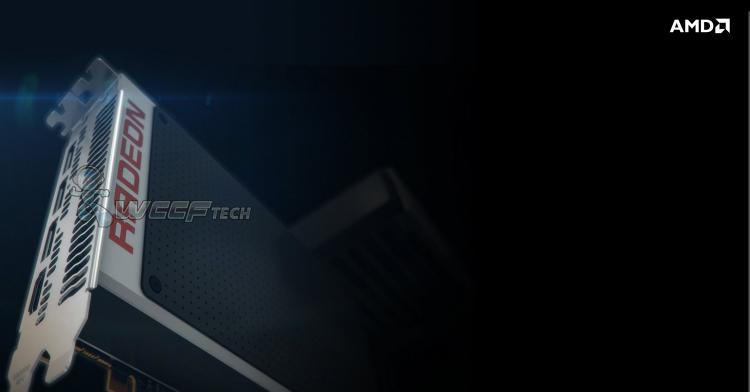 This second image, attributed to AMD by way of WCCFTech.com, indicates the likely display outputs for this new card. Three Displayports and one HDMI would likely be augmented by a DVI adapter bundled with the card itself. With three Displayports as standard it would be very nice to see AMD add multi-display FreeSync to their repertoire, especially for flagship models and forthcoming advances in VR.

As usual, rumours and leaks such as these need to be taken with a pinch of salt. However, real or merely an artistic impression, the images serve to whet our appetites ahead of official announcements and whatever else might be revealed on June 16th.

There are currently 729 user(s) online:
Google