Today, slides from an AMD presentation have surfaced showing the road map for their new Zambezi CPUs and upcoming APUs.

Four Zambezi AM3+ CPUs are shown, two 8-core (one 125W TDP, one 95W TDP) with the lower power version most likely to be a slightly slower chip, despite the similar levels of cache. All the CPUs also support Turbo Boost, a feature from AMD that disables inactive cores and boost the speed of the active ones, as seen in the current 6-core lineup.

The slide also shows that the Zambezi CPUs Integrated Memory Controllers (IMCs) will support up to DDR3-1866, which is a good step up from the DDR3-1333 that Thuban, Deneb and similar currently only officially support. 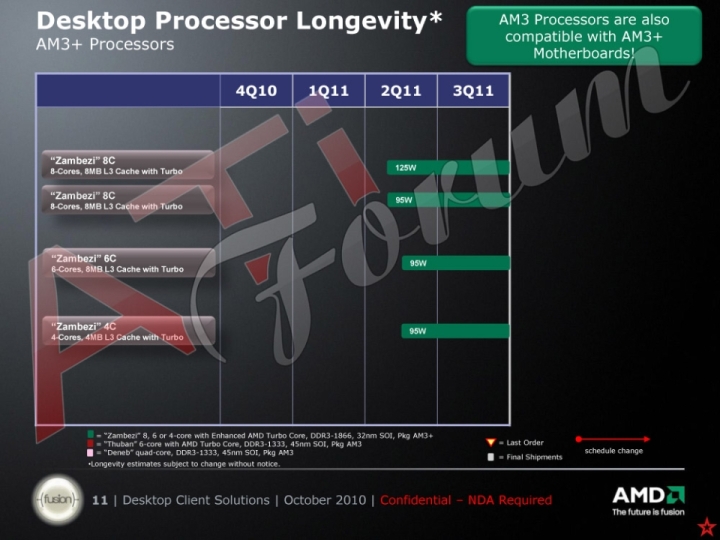 The second slide shows the Fusion APUs set for release next year. They are a mixture of single, dual, tri, and quad cores with built in DX11 GPUs. The DX11 support is significant when looking at Intel's upcoming Sandy Bridge processors, which are said to only support DX10.1. However, none of these are likely to be powerful solutions, so serious gaming will most likely be out of the question and therefore DX11 support not being so essential. 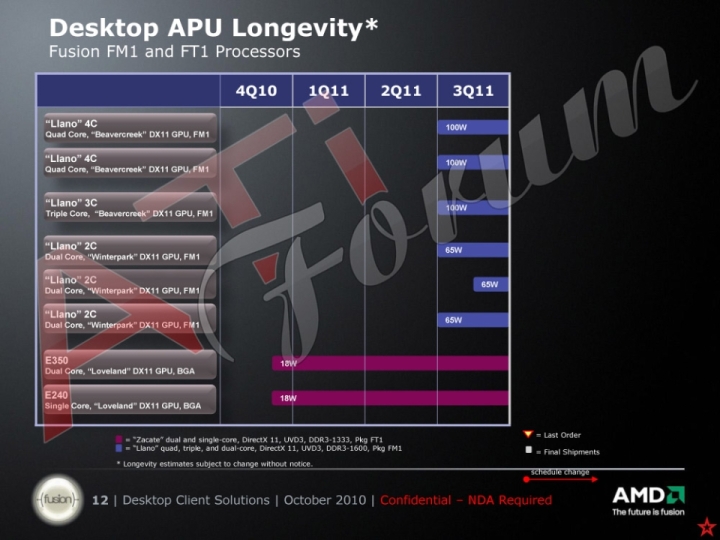 Another interesting piece of information that emerges from this slide is the apparent delay of Llano APUs until Q3 2011 - they were expected to release before Bulldozer in Q2 as shown above. Rumours of production issues with the first Fusion APUs are starting to surface - note also that the FM1 indicates a new Socket for these processors that are designed to replace the current Athlon lineup. This may also indicate AM3+ doesn't have as much longevity as we would hope.

For a bit more information, see the source of these slides: