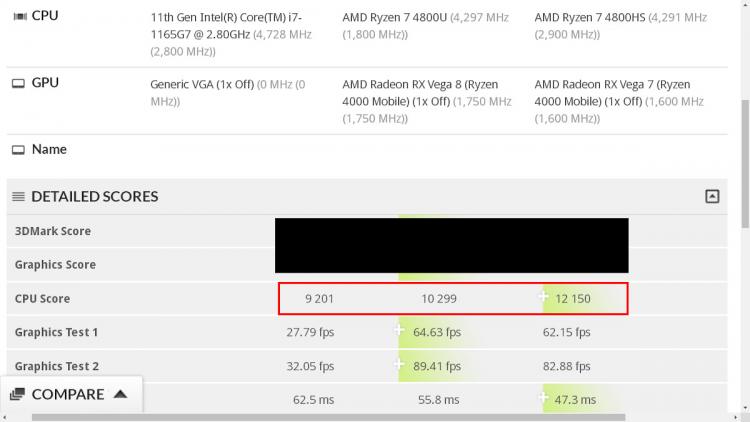 If rumours are true then the debut of Intel's 11th Generation Core 'Tiger Lake' CPUs for notebooks is not far away, and hence seeing a few leaked benchmarks here and there isn't unexpected. Such is the case today as perennial rumour-monger APISAK posted results for 3DMark's Night Raid test comparing an apparent 11th Gen. Core i7-1165G7 with AMD's Ryzen 7 4800U and 4800HS, pitting Intel Gen12 Xe graphics against AMD's optimised 7nm Vega solution. The initial results don't look great for the blue team however.

3DMark Night Raid is a DirectX 12 test tailored specifically for iGPUs rendering at 1080p, and as such is a more reliable comparison tool for this performance-limited hardware (rather than discrete desktop graphics). A good overall score relies on robust CPU and graphics elements, but the test will also break down individual metrics within each test bracket.

Little is currently known about the precise graphics solution within Intel's Gen12 Xe-equipped chips. When fully enabled they should have up to 96 execution units (50% more than Gen11), likely operating at clock speeds of around 1GHz (the typical ballpark for Intel's current 10nm integrated graphics solutions). The revised Xe architecture should be much more effective than Gen11 at both compute and rendering tasks on a unit-by-unit basis, but just how much more effective remains to be seen.

AMD's Vega 8 graphics within the 4800U features 512 shaders across 8 Compute Units operating at 1.75GHz, whereas the 4800HS's Vega 7 shaves off one CU. Neither Compute Unit nor shader are directly comparable to Intel's Xe execution unit so performance disparities are hard to predict. Failing to reach even 50% of the Vega solution's FPS in both Graphics Test 1 and 2 is a body-blow, and the overall score is over 1000 points behind.

The results outlined are little short of a disaster for Intel if the i7-1165G7 is intended as a competitor for the 4800U at a 15W TDP, but other factors need to be considered. For one: drivers - were the Intel graphics drivers used mature, or a poorly optimised release? And of course whether the full iGPU hardware of this engineering sample was enabled on this unit, or if sections were selectively disabled.

If the results are accurate then Intel has a lot of work to do ahead of Tiger Lake's grand reveal in the coming months. At the very least they need to show competitive numbers versus AMD's low-power Ryzen 4800U, even when hampered by a quad-core rather than 8-core CPU configuration. Traditional dominance within the mobile sphere will only go so far.