NVIDIA are preparing to unleash the final member of their GeForce RTX 20 SUPER-series GPUs, but in advanced of the full reviews one intriguing result has been leaked regarding its performance. Coming via WCCFTech is a minor summary of the card's performance, making for some encouraging reading if you've been holding out for this Turing refresh GPU.

The Final Fantasy XV benchmark isn't exactly the first port of call when it comes to reliable performance results, chiefly because it's generally believed to heavily favour NVIDIA GPUs, but comparisons between the green-branded cards is fair game. In this instance an RTX 2080 SUPER (likely a Founder's Edition variant) surpassed not only its immediate predecessor, but also NVIDIA's Pascal-based TITAN Xp. 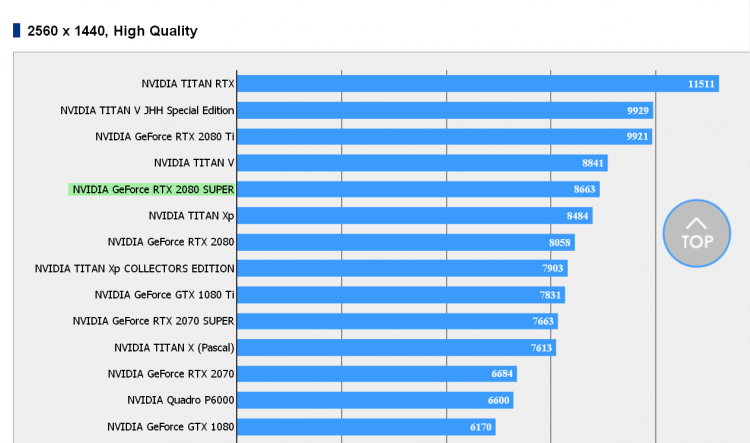 The TITAN Xp may have been from the previous generation but its certainly no slouch, and has in the past only been surpassed by the hulking great chunks of silicon which are known as the RTX 2080 Ti, RTX TITAN and TITAN V. The result, which approaches that of the latter GPU, is approx. 7.5% higher than the RTX 2080.

The test was performed at 1440p High Quality presets, allowing the card to take advantage of pretty healthy specs if prior reports are to be believed. This card is equipped with a full-fat Turing-based TU104, unlocking more CUDA cores than the original RTX 2080 and perhaps higher clock speeds to go with it. However as resolutions and image quality settings climb the card will also lean more on the 8GB of higher-speed 15.5 Gbps GDDR6 memory it's equipped with, which in turn would account for its gains over the TITAN Xp (itself equipped with 12GB of slower GDDR5X VRAM).

Many will view an only 7% improvement over the RTX 2080 as something of a disappointment. In this isolated benchmark we certainly don't see the double-digit percentage improvements enjoyed by other RTX 20 SUPER-series entrants compared to their vanilla variants, but its worth repeating that this card comes in at the same MSRP as the SKU it replaces. It therefore still represents another step forward in improving the value offered by NVIDIA's GeForce RTX 20-series range, even if it's a relatively small step.

Keep your eyes peeled for RTX 2080 SUPER reviews in the near future.

There are currently 750 user(s) online:
Google