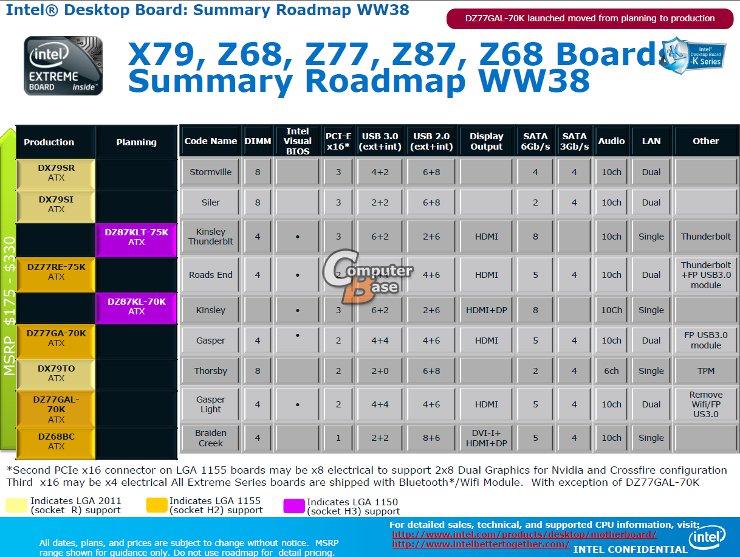 Computerbase.de yesterday released eight slides detailing the release plan for Intel's Kinsley Z87 motherboard platform for Haswell CPU's, and it makes for quite interesting reading. By far the juiciest nugget of information is the projected release date: Q2 2013, one year on from Ivybridge and heralding the end of LGA1155.

Haswell CPU's will move the mainstream Intel line to LGA1150, not backwards compatible with Z77/75 etc. and also meaning that IvyBridge and Sandybridge will not have extended compatibility to the new motherboard platform. The improvements in Haswell's CPU architecture should be fairly substantial and akin to the transition from Lynnfield to Sandybridge, though one can only hope it will come with the performance improvements that change brought. They will remain on 22nm however, thanks to Intel's 'Tic-Toc' development process; some indications are that the on-die GPU architecture will only see minor changes too.

The full suite of Haswell-supporting motherboards will of course me more extensive than merely the enthusiast Z87 range - H and Q versions will exists for non-overclockers and businesses. A total of nine Haswell 'boards are lists in the slide, ranging from ATX down to even mini-ITX form factors, all to be launched in the same quarter. This may indicate that a full range of Haswell processors will be released concurrently, but the Q2 date is too much of a ballpark or say for sure.

In terms of features, Kinsley Z87 will be very similar to Z77, including both Thunderbolt and non-Thunderbolt variants. Curiously the non-Thunderbolt version will still feature DisplayPort video-out, perhaps in the expectation of >1080p resolutions becoming more widespread than currently. Also somewhat surprising is the lack of dual-LAN on either of the enthusiast models, though if there is demand no doubt AIB's will build versions with additional networking. Confirmation of an earlier story also comes in the form of listing 8 SATAIII 6Gbps ports, rather than the 2 of Z77.

With luck there will be more information on Kinsley and Haswell in the coming months. Click here to view all eight slides in the series.

There are currently 126 user(s) online:
Google