LG Display has announced the creation of the world's first Quad HD AH-IPS LCD. What is a Quad HD AH-IPS LCD apart from a lot of capital letters put together? Well the answer is actually very simple. It is a massively high resolution (2566 x 1440) 5.5 inch display with a 538ppi (pixel per inch). It has the highest resolution and the highest pixel count per inch of any other mobile display to date. 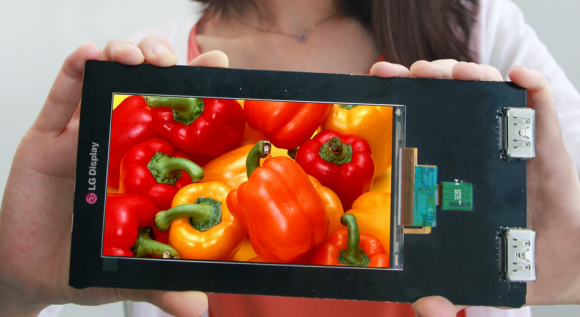 With such a huge resolution on such a small screen the contrast and vividness of the content being displayed is exceptional, according to LG that is. But it makes sense that the images would be more crisp and life-like as well as the ability to watch Blu-ray equivalent quality videos. Another benefit is the ability to view desktop web pages in all their glory, with text being sharper. One can't help but wonder how this will affect the market given the constant yearning for larger screens on devices.

LG Display, which pioneered the high resolution mobile market with introduction of the worlds first Full HD smartphone panel in 2012, again opens new possibilities with the successful application of QHD technology. With this breakthrough, LG Display will continue to raise new standards for mobile resolution and lead the mobile display market.

Despite it's viewing size the screen itself is a mere 1.21mm thick and has a 1.2mm bezel in LCM which makes it the slimmest and narrowest available. However, one thing that hasn't been mentioned is the power consumption of the panel which will obviously affect battery life in any device it's part of. There is no word on which devices this will be available in or when this will hit the market.