Today Logitech announced the newest addition to its G-Series line of high performance gaming products: the Logitech G710+ Mechanical Gaming Keyboard. Designed to help you focus on the game, this keyboard is tested and tuned to deliver what gamers want: minimal distraction, rapid response, and complete control.

"The Logitech G710+ Mechanical Gaming Keyboard was created to meet the specific needs of gamers," said Mark Starrett, senior global product manager for Logitech. "We road tested this keyboard with professional gamers, partners, publishers, and everyday gamers like you and me, to ensure we've created a mechanical gaming keyboard that exceeds expectations." 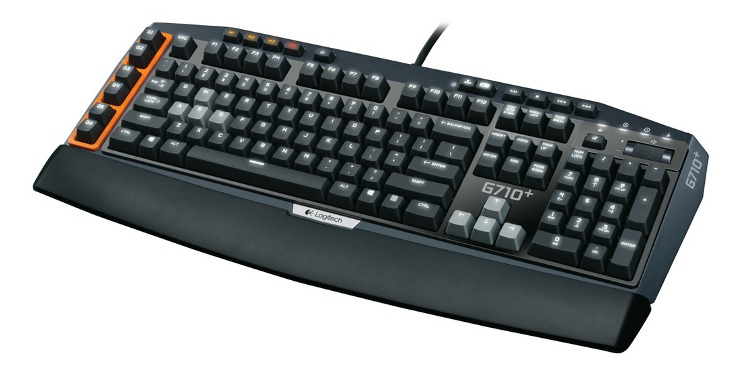 The keyboard's mechanical keys deliver gaming-grade responsiveness, featuring an actuation force of 45g and distance of 4 mm, and are optimized for rapid command entry. Additionally, the non-clicking key switches have a built-in dampening ring underneath each keycap to significantly reduce the distracting noise coming from your key presses without sacrificing responsiveness. The keyboard has undergone a torturous testing process to help ensure durability, with a cycle life of at least a 50 million keystrokes.

The entire keyboard is backlit in white LED light, adjustable to one of four brightness levels, and can be turned completely off. For better visibility of the WASD and arrow keys, their brightness can be adjusted independently of the rest of the keyboard.

Using the newly updated Logitech Gaming Software, you can assign complex macros or intricate Lua gaming scripts to the keyboard's G-keys  both on the fly and in advance  for up to 18 individual functions per game. Plus, all 110 keys feature anti-ghosting and 26-key rollover to help ensure you can execute complex key-commands with flawless precision. The Logitech G710+ Mechanical Gaming Keyboard is compatible with Microsoft Windows 8, Windows 7, and Windows Vista.

"The first major event that I used the Logitech keyboard was at MLG Summer Arena," said NYJacky from Team Curse. "I looked at my creep score after the tournament and it was higher than normal. Most of the time you need to get used to a keyboard - this one you just slip into quickly. I would never, ever think of using anything else."

The Logitech G710+ Mechanical Gaming Keyboard is expected to be available in the U.S. and Europe beginning in October and December 2012, respectively, for a suggested retail price of $149.99.