Maxwell In The Mainstream - NVIDIA Launch The GTX 950


Released in February 2014, NVIDIAs GTX 750 and 750 Ti were the first generation of graphics cards based on NVIDIAs near-revolutionary Maxwell architecture. They gave us a glimpse of the eye-opening efficiency wed see from later performance class products, and since then weve seen both the high end (first with the GTX 980 and more recently GTX 980 Ti) and later the mid-range (including the GTX 660) designs fill out NVIDIAs product stack. For all intents and purposes however NVIDIAs entry-level GeForce card has remained unchanged in that time. Until today.

Based on the GM206 comes the GeForce GTX 950, a new 90W mainstream GPU priced to compete with AMDs Radeon R7 370 and with a suite of features designed to complement robust performance figures. The recent release of a new operating system from Microsoft has also hearalded the DirectX 12 era, a new graphics API which will reduce CPU overhead when gaming and boost performance for PCs both old and new. However NVIDIAs Maxwell architecture goes a step further by supporting DirectX 12 Feature Level 12_1, a higher level than the competition and hence something of a future-proof option even whilst not being priced at a premium level. Coupled with 2nd Gen Maxwells excellent perf/watt figures, updated memory back-end and, and bundled tools such as GeForce Experience and Shadowplay, the GTX 950 is already looking quite the promising card from the outset. 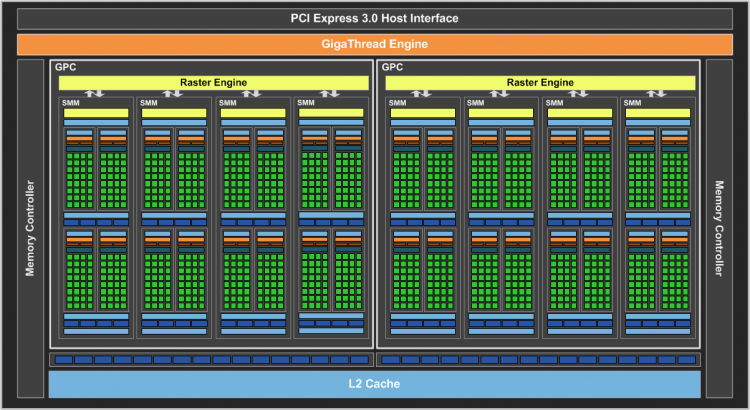 The GTX 950 is based on the same GM206 silicon as the GTX 960 released earlier this year. Incorporating a highly flexible caching system, each Maxwell Shader Module features its own dedicated 96KB shared memory, while the L1/texture caching functions have been combined into a 24KB pool of memory per pair of processing blocks (48KB per SMM). Furthermore, an additional 1MB L2 cache is shared across the entire GPU. As a consequence the GPU will make fewer memory transfers, and hence perform more effectively.

Building on these improvements is the incorporation of NVIDIAs 3rd Generation Delta Colour compression, a loss-less algorithm which reduces the number of bytes/frame by ~25% and increases the effective memory bandwidth by the same amount compared with Kepler (based on internal benchmarks). At the performance end of the spectrum these improvements have shown to help Maxwell-based GPUs overhaul on paper memory bandwidth deficits, and bringing it to the entry level and mainstream segments should result in the potential for higher image quality at the same frame rate. Tempting, for any gamer.

Colloquially known as a salvaged part (a somewhat unfair wording), the GPU doesnt quite have the full-fat design of the GTX 960s GM206. Two SMMs have been disabled, bringing the total down from eight to six, which has a knock-on impact on both number of CUDA cores (down to 768) and Texture Units (48 from 64). This in turn will have an impact on overall performance, a little at 1080p (the bread-and-butter resolution for cards in this class) but perhaps most notably higher resolutions and image quality settings.

Compare that however to the GTX 750 and 750 Ti, two cards which the GTX 950 will ostensibly supersede. First-generation Maxwell cards with 512 and 640 CUDA Cores respectively, both featuring much slower memory, the GTX 950 should out-perform them comprehensively in all roles. Pricing concerns mean that the 950 is unlikely to replace both cards in the short-term, but its not for nothing that this card will be viewed as the benchmark entry-level GPU at the start of the DirectX 12 era.

The GTX 950 makes use of a slightly more conservative reference base clock than both the GTX 960 and GTX 750 Ti, but it also boosts slightly more aggressively than the GTX 960 up a respectable 1188MHz. A more significant step down is in the memory speed  despite the same 128-bit bus width the GTX 950 has a data rate of only 6.6 Gbps, underscoring its 1080p focus rather than higher resolutions or highest image quality settings. By incorporating 2GB GDDR5 VRAM however the 950 should not be bottlenecked under normal circumstances by a small frame buffer, one flaw of older entry-level designs.

By basing the new card on the same GM206 GPU as the GTX 960 NVIDIAs retail partners such as ASUS, GIGABYTE, MSI and EVGA can launch the card with their own non-reference PCB and cooler designs from outset. Adhering strictly to the reference specifications wont be the norm; expect hefty overclocks on both the core and memory depending on the AIB and cooling solution used. Judging by the GTX 960 factory overclocking on the order of 100MHz isnt beyond the realms of possibility, and those willing to get their hands dirty may well find that (like many Maxwell GPUs) the card will respond well to ones own efforts in that arena.

A relatively low TDP has meant that compact designs are possible, such as this from ZOTAC

The card ships with a reference TDP of 90W, climbing higher based on factory overclock and 3rd party features incorporated on the card. So long and you have a recent PSU of decent quality it should be an in-place swap requiring no further upgrades.

Its worth noting that the GTX 950 also supports SLI, the first entry-level NVIDIA GPU to do so since the GTS 450 back in the days of Fermi. Although SLI, especially at this end of the market, has fallen out of favour in recent years it could still be of added value later in the cards life-time (i.e. when prices have fallen and a 2nd card can be picked up cheaply). Generally speaking however we recommend spending the same total amount on a single GPU; raw performance potential wont be as high, but compatibility will be far more robust on virtually every game youll play. In the same vein G-SYNC is also fully supported, even though monitor costs will tend to push the technology out of the hands of entry-level and mainstream gamers.

Weve spoken in the past about NVIDIAs support for DirectX 12, a laundry-list of features which surpass those of AMDs older GCN-based cards, so we wont belabour the point. Even though Windows 10 has now been officially launched DirectX 12 titles remain few and far between, plus the higher feature level (i.e. Feature Level 12_0 and 12_1) processes remain somewhere on the horizon in terms of their real-world implementation in modern games. Theyre important, but perhaps one of two years away from being deal-breakers. That said, there are other features which may also be of high value to new owners.

Each GTX 950 supports up to 4 displays with a total resolution of up to 5K (5120 x 3200). Of course, it wont be feasible to game on this sort of resolution with the card, but if your system plays a dual-gaming and productivity role its certainly something to be aware of. The reference configuration is of one Dual-Link DVI, three mini-DisplayPorts and an HDMI 2.0 port, the latter if which supports HDCP 2.2 and also unlocks 4K @ 60fps through the HDMI. Its notable that this feature isnt even present on the competitions flagship model.

NVIDIAs GeForce Experience application will also help to optimise game settings for a more balanced compromise between frame rates and image quality on a game-by-game basis. GFE also includes Shadowplay, NVIDIAs streamlined game capture and streaming tool for Kepler and Maxwell-class GPUs, as well as driver update notifications and live updates of game setting optimisations. By leveraging their massive install base NVIDIA are able to offer users the best possibly settings for their hardware configuration based on a range of criteria, representing considerable value in time saved.

Finally, those who utilise Shadowplay or other game recording/streaming software should also be away of the on-board HEVC h.265 encode/decode capabilities of the GPU. When used, it will greatly reduce the CPU overhead of video encode, making streaming all the more viable.

According to the latest Steam Survey NVIDIAs GTX 650 is currently the 5th most widely used discrete DirectX 11 GPU, and this is the GPU which NVIDIA has firmly in their sights as a prime replacement target. NVIDIA peg the GTX 950 at roughly three times the performance of the 650 in select titles, helped not only by the improvements made in the shift from Kepler to Maxwell but also the larger frame bus and memory bandwidth.

NVIDIA also recognise that many of the titles still played on the GTX 650 (and presumably to be played on the GTX 950) arent the most taxing with baseline settings at 1080p. Naturally the GTX 950 also supports FXAA and MSAA, allowing users to make best use of any spare horsepower they may have; however the GPU also supports the latest MFAA temporal anti-aliasing technology and Dynamic Super Resolution, for even more of a performance and image quality boost where possible. Anyone still enjoying the classics can make their games look even better through an upgrade without changing other aspects of their system, whilst cutting-edge MOBA players can game with higher fidelity graphics.

In launching the GTX 950 NVIDIA are also highlighting a latency performance improvement over the GTX 650. By leveraging the GeForce Experience optimisation tools and overall performance improvements, the GTX 950 can increase responsiveness in a wide variety of games that demand fast response times. NVIDIA claim a reduction in frame latency from 80ms to 45ms by moving from a GTX 650 and enabling GFE optimisations, an improvement not to be sniffed at. DOTA 2 is mentioned specifically and MOBAs more generally, but it shall be interesting to see if this technology is built-upon for more graphically challenging titles.

The MSRP of the GTX 950 is £128.99/~175 inc. V.A.T., which to be fair is not an inconsiderable amount of money. NVIDIAs internal benchmarks tend to place it between 5 and 15% faster than the AMD Radeon R9 370 (analogous to the R9 270), but as usual you should rely on independent benchmarks when making your purchasing decisions. This price also puts it £30-40 cheaper than 2GB SKUs of the GTX 960 so dont be surprised if theres some overlap with high-end GTX 950 partner SKUs; itll be interesting to see just how much these two cards cannibalise each-others market, if at all.