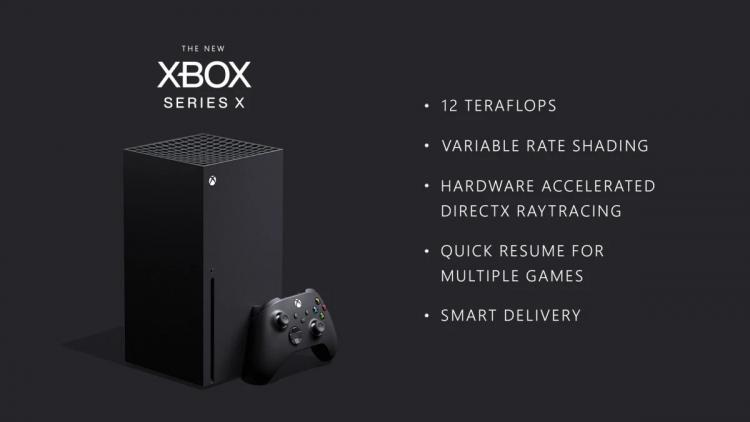 The battle for mindshare in the next-generation console wars has reached a new flashpoint this week as Microsoft reveal selected specifications for the XBOX Series X. Launch is many months away but, ahead of GDC 2020 in March, the current favourites have lifted the lid on the hardware capabilities of their upcoming big black box.

Heading the list of XBOX Series X features is new graphics hardware from AMD based on the 2nd Generation RDNA architecture (RDNA2). It's purportedly capable of up to 12 TFLOPS (likely FP32 rather than FP16), smoking the 9.8 TFLOPS throughput of the Radeon 5700 XT and doubling the performance of the XBOX One X. Hardware accelerated DirectX Ray Tracing is supported alongside a custom and proprietary implementation of Variable Rate Shading, where rendering assets are dynamically allocated to sections of a scene based on complexity, texture detail or other developer-defined flags.

The CPU cores are based on AMD's Zen 2 architecture, which has debuted so successfully in 3rd Generation Ryzen CPUs. The custom SoC/APU can therefore be likened to an extremely powerful variant of the upcoming Ryzen 4000-series APUs with upgraded graphics. We wonder whether Microsoft will stick with air cooling or transition to a compact liquid cooling system.

Microsoft's design also calls for HDMI 2.1 compliance (supporting Variable Refresh Rate over HDMI), an Auto Low Latency Mode (ALLM), and up to 120 fps on suitable displays. The second of those sounds an awful lot like Radeon Anti-Lag, a technology rolled out successfully to AMD graphics hardware and drivers last year. Both casual and competitive gamers should be chuffed to bits about these features.

The console will also integrate next-gen SSD technology (likely NVMe PCIe Gen 3 rather than Gen 4) rather than SATA HDD or SSD, reducing load times and improving overall system responsiveness. NAND storage isn't terribly expensive, especially compared to 2013, but pushing >1TB capacities will still add quite a bit to the bill of materials. It's possible that Microsoft will choose tiered storage techniques to leverage NVMe SSD speeds and mechanical storage capacities together, but that would add some complexity to the design.

And finally, Microsoft are aiming to reduce the latency between controller and console with a technology they're calling Dynamic Latency Input (DLI). It makes use of their proprietary wireless controller communications protocol to 'synchronise input immediately with what's displayed', making gameplay more precise and responsive.

The XBOX Series X is expected during 2020's holiday period (the time between Thanksgiving and Christmas), and will compete directly with Sony's Playstation 5. Adding to the viability of the platform will be backwards compatibility with a host of older titles as well as native games available at launch.