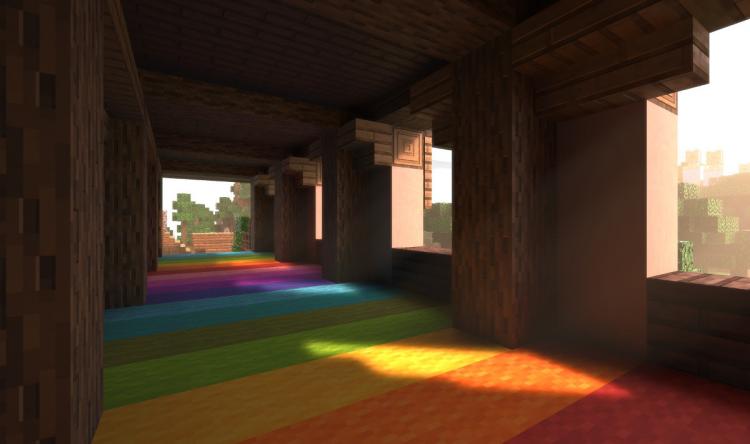 Gamescom got underway earlier today with a series of low-key reveals from developers in partnership with NVIDIA. That shouldn't be a surprise, NVIDIA did warn us that their technologies would be a fixture of upcoming titles on PC that make an appearance at the expo, and the week has certainly begun strongly enough.

Of the three major titles wheeled out today the most significant wasn't a new one, but rather a well-established juggernaut: Mojang's Minecraft. Long having departed from its indie roots, the game is now backed by Microsoft and continues to expand development with new rendering technologies that improve experiences in this humble block-based world. Just last week however they announced the Super Duper Graphics Pack's cancellation, citing an inability to get this high fidelity mod available across multiple platforms; integrating Ray Tracing - currently only available on NVIDIA hardware via Windows DirectX Raytracing API - is a curious choice.

According to the post Minecraft's Render Dragon game engine update will included technologies made available as part of NVIDIA's RTX toolkit, an update that's scheduled for the near future. Implementation via Beta releases should begin in early 2020, but only apply to the native Windows 10 platform and not necessarily be rolled out to the Java variant which enjoys the majority of in-game mod support. The extent of features include ray traced lighting, reflections, lighting refraction through materials and user-placed ray traced lighting sources (i.e. emissive blocks).

The second title revealed to integrate NVIDIA RTX features is Watch Dogs: Legion. This open-world RPG from Ubisoft will hopefully live up to the graphical promise of the original franchise installment, and looks set to incorporate high fidelity ray-traced reflections for a far more immersive alternate London. The game launches in March 2020, and in-game screenshot comparing RTX On and RTX Off are available here.

The final reveal was for RTX features in the long-awaited Vampires: The Masquerade Bloodlines 2, published by Paradox Interactive. Like Watch Dogs: Legion, Bloodlines 2 will include RTX ray-traced reflections in-game to flesh out the atmosphere so critical to games which place a premium on stealth gameplay. Bloodlines 2 is scheduled for Q1 2020, which is increasingly looking like a packed release window for PC.

Also confirmed at Gamescom is the integration of real-time raytracing into Activision's CoD: Modern Warfare remake. The game will feature ray traced shadows, similar to that seen in Shadows of the Tomb Raider, as an option in both the Single Player campaign and 2v2 multi-player. The full game is scheduled for late October but fans can get a fix in the limited Beta that's due on September 19th.

There's plenty more from NVIDIA and their partners to be unveiled at Gamescom, spanning both Indie and AAA releases for 2019 and 2020.

There are currently 599 user(s) online:
Google