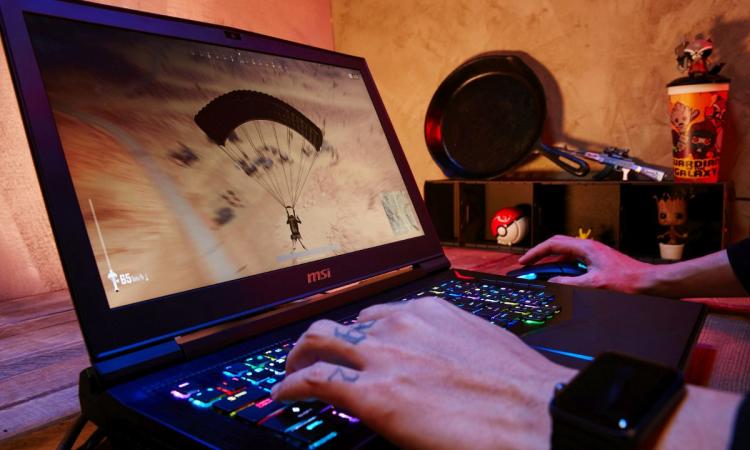 It wont have escaped your attention this morning that Intel have just launched a selection of new motherboard chipsets and consumer CPUs to add to their previously modest 8th Generation lineup. Not coincidentally, component manufacturer MSI have also shared plans for a new selection of performance oriented gaming notebooks based on this lineup. The augmented range will now feature CPUs up to Intels new Core i9 6-core, 12-thread chips, which will be incorporated into MSIs Titan, Stealth Thin and Raider models.

Three brand new models headline MSIs updated selection of gaming notebooks, each of which are equipped with Intels 8th Generation CPUs. Their highest performing is the GT75 Titan, the first to have the option of an Intel Core i9 hexacore CPU as well as NVIDIA GeForce GTX 1070 SLI graphics and 4K panel. The GS65 Stealth Thin meanwhile is a lightweight laptop with gaming punch and an industry-first 144Hz panel. Last but not least, the CES debutant GE Raider RGB Edition makes its mark with comprehensive lighting options, up to 4K resolution panel and HM370 chipset. Plus, existing models in MSIs notebook lineup are being upgraded to offer new Intel 8th Gen. CPU options. 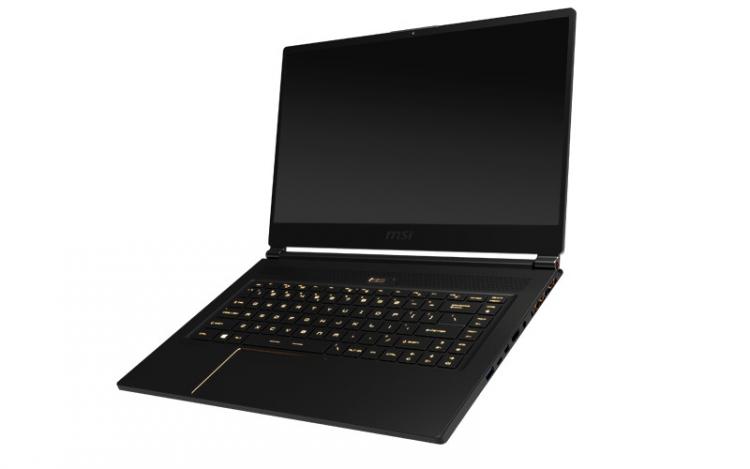 The GS65 Stealth Thin claims the accolade of the first laptop to feature a 144Hz 7ms IPS panel with slim 4.9mm thick bezel, giving the screen an edge-to-edge look and boasting >80% screen-to-body ratio. Furthermore the entire system only weighs 1.79kg and is only 17.7mm thick, hence the Stealth Thin moniker. So, its pretty sleek, but what about the specs?

Aesthetic inclusions to the GS65 chassis are a new per-key RGB keyboard designed by SteelSeries, which is further augmented by an update to MSIs Dragon Centre 2.0 software that brings a more intuitive UI and brand new exclusive game mode with game-specific profiles. A gold trim meanwhile give the design just a little bit of bling that isnt dependent on LEDs.

Finally, the slim chassis packs in a 4-cell battery that gives the GS65 Stealth Thin up to 8 hours battery life, underscoring its portability despite gaming chops. 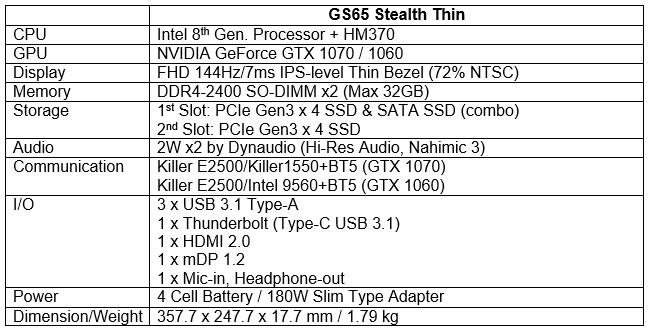 The GS65 Stealth Thin is now available to preorder and will be online and in stores by the end of April.

GT75 Titan, including i9 Hexacore Processor 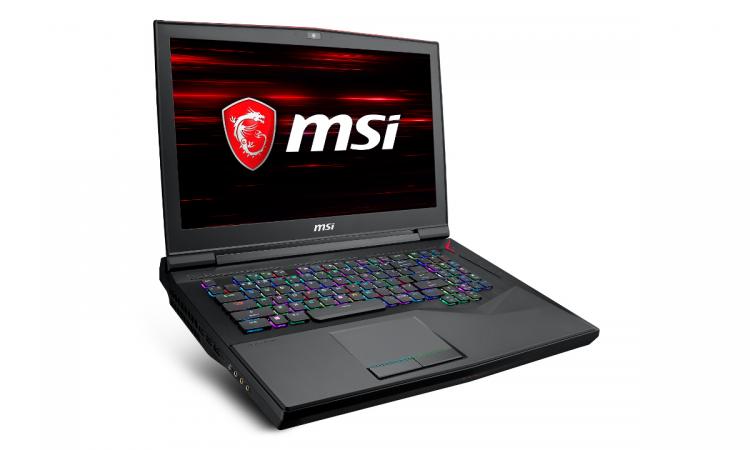 Although its the second gaming notebook were detailing, the GT75 Titan occupies a place firmly in the upper echelons of MSIs gaming notebook range. This Titan takes performance notebooks a step further by installing up to an overclocked Intel Core i9 hexacore CPU, no-doubt rivalling desktop gaming system performance. This 6-core, 12-thread part and its GPU partner are cooled by the powerful MSI Cooler Boost Titan, a solution specific to the Titan line that can even handle a pair of NVIDIA gaming GPUs in SLI.

The GT75 Titan comes with all mod cons including RGB mechanical keyboard by SteelSeries, choice of 17.3 4K or 1080p144 panel, multiple M.2 NVMe SSD drive support and Intel Thunderbolt 3 technology. Even the networking is amped up thanks to Killer Doubleshot Pro Ethernet and Killer Wireless-AC 1550. 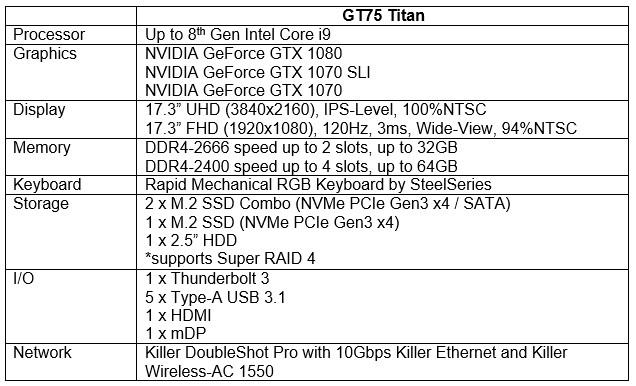 MSIs GT75 Titan is very much billed as a desktop-replacement, supporting high-end gaming, streaming and (decidedly less-fun) workplace requirements. However despite its plethora of configurable features and high-end components its not the only Titan they have on their team - both the GT83 and GT63 are to be upgraded to offer new processors from Intels 8th Generation range.

The GT83 can be equipped with Intels latest 6-core, 12-thread CPU that offers up to 40% improved performance compared with the previous range. Also incorporating a mechanical keyboard with high-speed Cherry MX Speed Silver switches and the option of a pair of GTX 1080 GPUs in SLI, its a true no-holds-barred gaming laptop.

Boasting a claim of being the most powerful 15 motherboard on the market, MSIs GT63 Titan offers NVIDIA GTX 1080 graphics alongside new CPU options as well as 4K or 1080p120Hz screen. An upgraded version of the GT62, its eclipses its predecessor in aesthetics as well as also now offering per-key keyboard lighting. 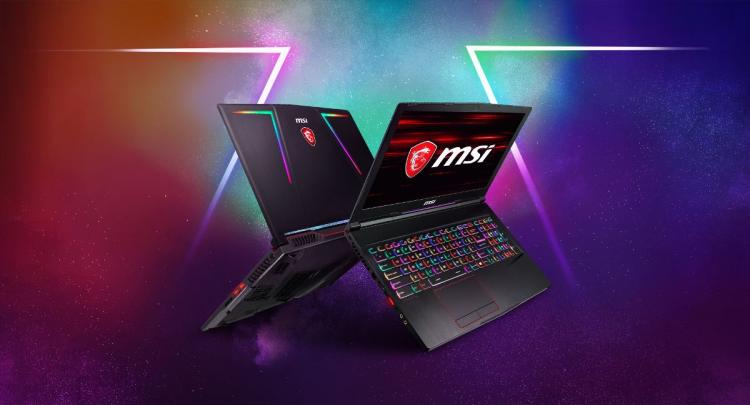 Debuting at CES 2018 was the GE Raider RGB Edition, which takes its cues from the world of sports cars and PC modding to offer RGB lighting trim throughout the chassis exterior. Of course any GE Raider RGB series laptop is also part of MSIs Raider gaming lineup, and so incorporates comprehensive gaming features and component configurations.

The GE Raider RGB edition was crafted for ultra-illumination, with RGB lighting on the top cover, keyboard and USB ports. The top cover alone features 24 separate zones of RGB lighting with 16.8 million colours available, and its fair to say that youre unlikely to see so much configurable RGB lighting on a laptop outside of bespoke designs. 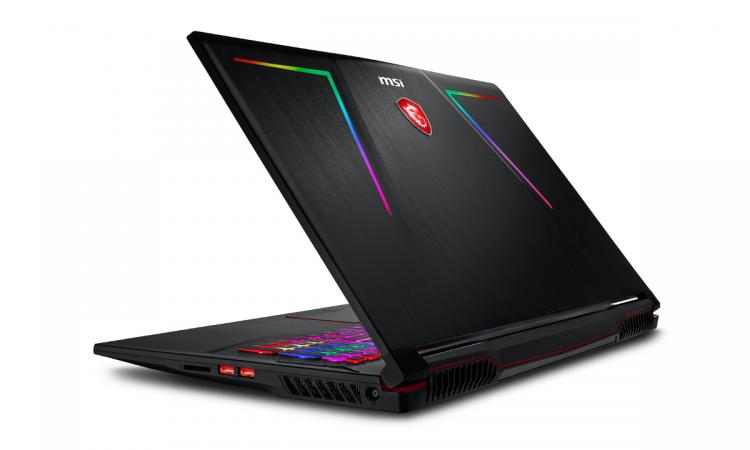 Thanks to MSI Cooler Boost 5, the design (either as 15.6 GE63 or 17.1 GE73) can handle up to NVIDIA GTX 1070 GPU as well as a broad selection of the updated Intel 8th Gen CPU range. Both 4K and 1080p120Hz panels are available with either model, as is Nahimic 3 audio and Killer wired and wireless networking. 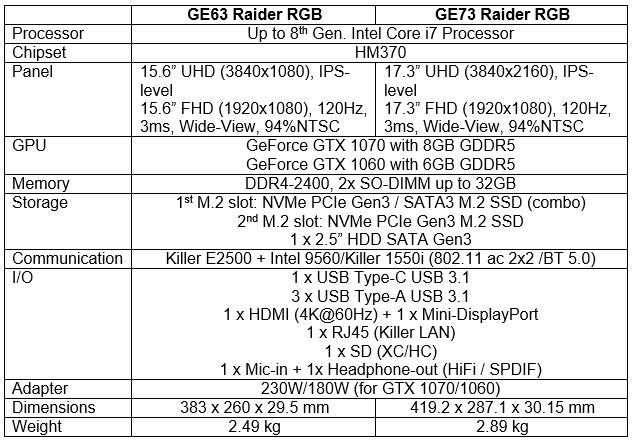