Despite the leaps in storage seen with the advent of SSDs for desktop system, storage still remains one of the major bottlenecks in PCs. It's with that in mind that [url=http://www.msi.com]MSI have taken it upon themselves to be the first manufacturer of Intel 9-Series motherboards to announce top-to-bottom support for the NVM Express storage standard.

NVM Express, AKA the 'Non-Volatile Memory Host Controller Interface Specification', is a specification standard by which host machines can access SSD-based storage solutions. In contrast to ACHI this new standard was built from scratch, and specifically leverages the parallel nature of PCI-Express SSDs as well as low latency for greatly improved bandwidth and access speeds. NVMe SSDs typically make use of PCI Express signalling, either through a standard PCIe card or more recently M.2 slot.

MSI has released BIOS updates which enabled native support for NVMe storage across their Intel 9-series range, including the common X99, Z97 and H97 chipsets. Following this update users will be able to make full use of NVMe storage as the primary drive for Windows 7 64bit and 8.1 64bit systems. The table below (supplied by MSI) shows the appropriate BIOS version for particular motherboard SKUs. 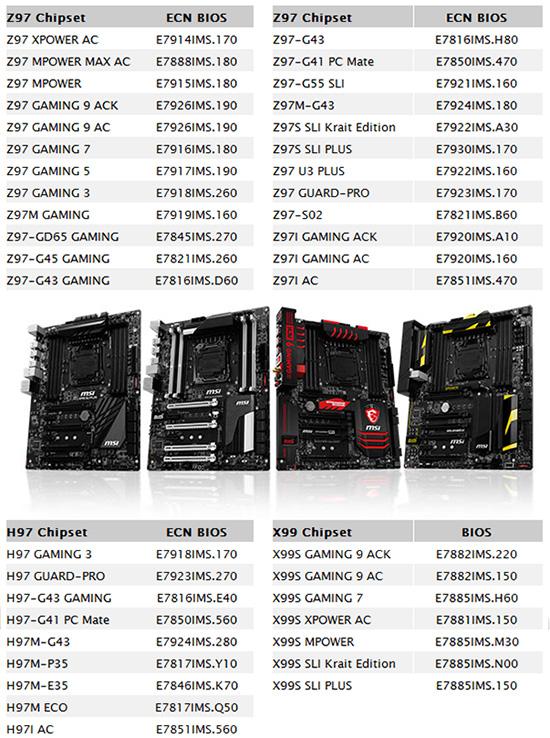 Note that only NVMe devices are able to take advantage of these benefits; legacy SATA-based storage systems and devices (including SATA-based M.2 storage) will see no change to their performance. Each BIOS can be download from msi.com, where you'll also find the latest chipset drivers.