MSI is proud to share its take on NVIDIAs exciting new GeForce RTX 4090 and RTX 4080 series GPUs, with graphics cards that unite the latest in graphics technology, high-performance circuit board design, and advanced cooling. MSI's line-up consists of the SUPRIM, GAMING TRIO, and VENTUS models. MSI also reveals the new SUPRIM LIQUID Series featuring an all-in-one liquid solution - the second brand to reveal an AIO liquid cooled RTX 40 Series graphics card similar to the COLORFUL iGame GEFORCE RTX 4090/4080 NEPTUNE models. The
MSI SUPRIM LIQUID replaces the previous-generation SEA HAWK which was using Asetek liquid cooling. MSI did not mention Asetek cooling as one of the key features of the new SUPRIM LIQUID graphics cards thus may be using something else.

The MSI SUPRIM cards are designed for performance, efficiency, and prestige. Cooled with TRI FROZR 3S, MSIs most advanced air cooling system, heat is effectively dissipated from critical board components with TORX FAN 5.0, up to 10 Core Pipes, Airflow Control fins featuring new Wave-curved 3.0 edges and air antegrade fins. At its heart, the RTX® 4090 and RTX® 4080 16G based models have a vapor chamber, while the RTX® 4080 12G based model will boast a massive nickel-plated copper baseplate. Brushed aluminum on the exterior of the cooler and the backplate impart an armored aesthetic while reinforcing the length of the card. MSI Mystic Light RGB flows with millions of colors and an array of customizable dynamic lighting options will dazzle onlookers. With Dual BIOS, users can quickly opt for low noise or for additional performance with the flick of a switch. All SUPRIM models are just as impressive in size as they are in performance, with the RTX® 4090 based model taking up 3.75 slots, while the RTX® 4080 models are a whopping 3.75 and 3.5 slots respectively.

Besides the air-cooled versions of the SUPRIM series, this generation will also introduce a version with the name SUPRIM LIQUID. Only available on the GeForce RTX® 4090, this series applies a closed-loop liquid cooling system that keeps temperatures even lower to allow new levels of performance. The 240 mm radiator is cooled by a pair of MSI Silent Gale P12 120 mm fans, designed to provide massive air pressure at extremely low noise. A single TORX 5.0 fan on top of a dedicated heatsink ensures more than adequate cooling for the power delivery components. 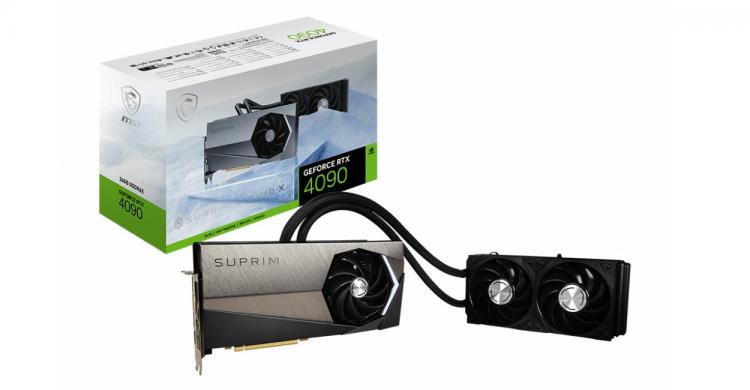 GAMING TRIO has been refreshed with a new, yet familiar look while maintaining the same great balance between performance, cooling, and low noise that gamers have come to trust. Leading this updated product series is the new TORX Fan 5.0 design with pairs of three fan blades bound together with an outer link, forming a rim that focuses airflow into the updated Tri Frozr 3 cooling system. At the core of the heatsink, the RTX® 4090 and 4080-based models featured the proven nickel-plated copper baseplate. The new GAMING TRIO series is fitted with a Dual BIOS to allow easy switching between Silent mode or Gaming mode for more performance. A brushed-metal backplate with a flow-through design reinforces the graphics card, while also providing passive cooling action through the implementation of thermal pads. MSI Mystic Light adorns the exterior of the graphics card, illuminating color in synchrony with the rest of the PC through Mystic Light Sync and Ambient Link. These new GAMING TRIO cards feature an impressive size with the RTX® 4090-based model taking up 3.75 slots and the RTX® 4080-based model coming in at 3.25 and 3 slots each.

The popular VENTUS series is back, now fitted with three of the award-winning TORX 4.0 fans. The embodiment of a no-frills Spartan design philosophy, VENTUS cards maintain the essentials to accomplish any task at hand. A robust cooling system, reinforcing brushed aluminum backplate, and well-rounded aesthetic make this graphics card suitable for any build. Being the more understated series, the two remaining RTX® 4080-based VENTUS 3X models are even slimmer at 3 and 2.5 slots each.